Home » And the final one from our UK trip – Powell Cotten Museum, a blast from the past for me!!!
0
SHARES
ShareTweet
Subscribe
But 1st things 1st – here is Amy Avatar!
Thanks to my brother for buying the face paints for Amy.
So after much pressure Ms Amy Kennett finally gets yours truly to get creative.
Here is the outcome!
Yes this was adorned in the morning, and she wore it all day.
Although gradually it sweated and wore off – leaving a sort of smudged Avatar face at the end. 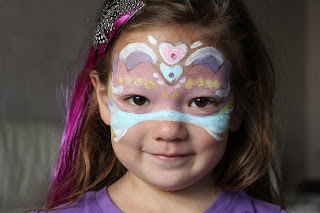 A quick trip this afternoon to see Quex Park which I have not been too for I think something like 30 years. Quite amazing as it is literally 10 minutes from Mum;s and pretty damn amazing as a place.
But before we get to that, what did I espy in the car park.
OMG – this thing is better than The BatMobile.
These are my kind of gadgets on a vehicle.
Look at this thing.
It’s a bar on wheels.
Yep an 8 seater bar you ate sideways on and pedal.
See the barrel at the front – that is for the driver, and in the middle is a walk way for the bar person.
At eh back you wire up a beer barrel and there is then draft beer being served on tap as you pedal to your destination. Gives drink driving a whole new meaning doesn’t it.
I want one!!!
I want it in Singapore.
What fun this would be.
Like a tuk tuk with a flipping bar.
I feel a franchise across the whole of South East Asia coming on – who wants in???
Ohhhhh I slipped in to Dreamy Land there, lah le lah le lah!!! Before Quex Park House there is Quex Barn.
This is brand new to me, converted to a sort of local shop and restaurant.
I bought a black pudding in here that was the size of a small child for about 4 quid – nice! Brian Doolittle Kennett talking to the animals.
Clearly no resemblance to Robert Redford and Horse Whisperer.
In fact I had had a beer at Quex Barn so leant in closely, breathed up it’s nose and it was ‘in my power’. 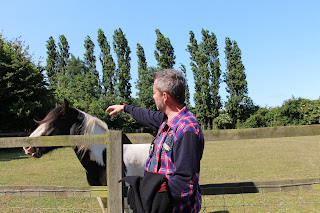 In to Quex House.
Owned by the Powell-Cotten family it is now a museum, heritage thing.
This one guy Major Percy Horace Gordon Powell-Cotten was an army chap who took it upon himself to explore the world with many forays to Asia and Africa, collecting knick knacks and shooting anything he could to stuff and mount (ooer) back at his house.
This was back in early 1900’s, and then he was called an early conservationist – what because he shot everything that moved? I think I even saw a Squeezel on the wall in one of the rooms! He is revered by some as the man who has collected the largest collection of stuff shot by an individual. Conservation or Culling – you choose!!!
He went overseas 28 times during 1887 and 1939, and wrote some books such as ‘A sporting trip through Abyssinia’ – now Ethiopia.
In 1905 he got married whilst on an expedition and to save stopping that trip his new bride came with him on a honeymoon that ended up lasting 2 years. Crazy. Imagine how dirty the white wedding dress would have got in Africa. Silly really! If he’d had had a stag night he’d have probably ended up shooting it!!!
One time though the animals fought back. He thought he had shot and killed a lion in 1907. Whoopsy, not he didn’t. When getting near to have a looksie at his fine handiwork the bloody thing jumps up and starts to try and eat him. Get this though, he had a rolled up copy of Punch Magazine in his breast pocket that deflected most of the blows and he survived – although when you see the suit he was wearing on display it was pretty mangled.
There you go kids – an early IronMan suit – all you need is a few rolled up comics and hey presto!
Lion 1 – Percy 0
In to the house.
FULL of stuff from his trips.
This a beautiful Japanese statue of a boy gathering fire wood. 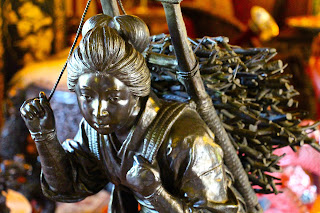 See what I mean – just tonnes of really cool stuff.
Chinese, Japanese, African, Malaysian etc etc… It goes on and on. 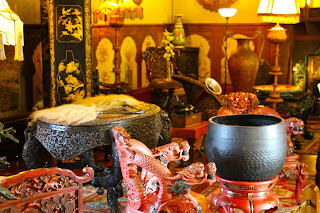 Doubling up but worth seeing the whole statue – really liked this.
Although he is walking like I did after a game of football these days. Scary one.
The laughing philosopher apparently.
If I had a black pen I would have put some dots for eyeballs – scary without.
Plus mate, next time I come I’ll bring you a toothbrush.
I have to admit I would’t be laughing with them pegs!!! 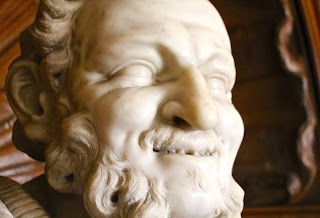 Bits and pieces from all over the world.
French clock from Paris with what I think is a backdrop of Chinese wall-paper. Cabinets of Japanese artefacts from his travels. 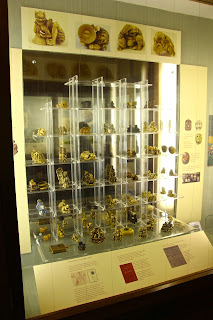 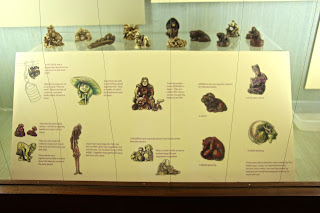 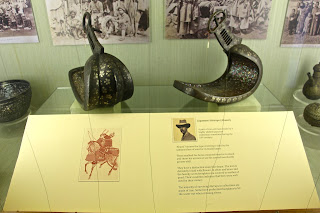 I would assume very rare and expensive Satsuma porcelain figurines.
Do you think this one is seedless? WTF is this?
Is it a Squeezel???
No its a baby chimpanzee in preservative.
Daddy-Pedia – did you know they use formaldehyde in Tiger Beer – perhaps that’s why I look like this when I have a few pints of that. 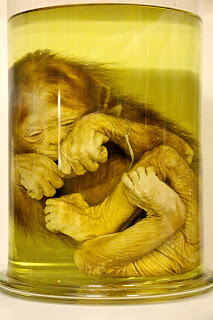 Loads of butterflies.
Yuko next time you are over you have to come see.
Pretty amazing collection.
Not brilliant photo as they have dimmed all the lights to protect the colours now. 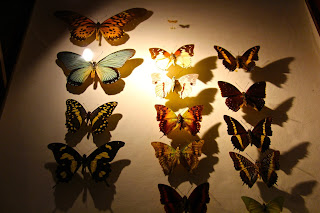 The you get to the stuffed animals.
Seriously this elephant is the size of a bus – those tusks are about 6 feet long – it is HUGE.
Sadly though the museum got broken in to in 2012, what were the thieves after? Have a guess? I better you’ll never get it. Was it the Satsuma porcelain, maybe the Delftware porcelain.
No it was the rhinoceros horns – can you believe it!
Stolen to give to the Chinese for herbal remedies – they get everywhere even Birchington, Kent.
Now the exhibits all have fake Rhino horns.
Sadly not satisfied with slaughtering whole Rhinos and leaving the bodies to decompose in the African sun, they will now go after the dead to ‘feed’ their bizarre habits. Sad! 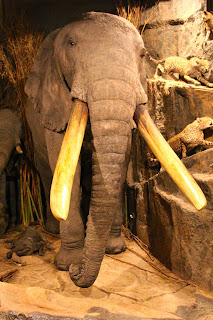 Amy got a little scared with this one.
Big male lion munching on a water buffalo – actually the water buffalo is the most dangerous animal to man in the wilds of Africa – did you know that?
I look at this and it reminds me of lunchtimes with the kids… Different horse, different field – but Dr Doolittle is back.
Amazing story I heard recently.
Did you hear about the really stupid guy who was playing water polo? He drowned his horse. 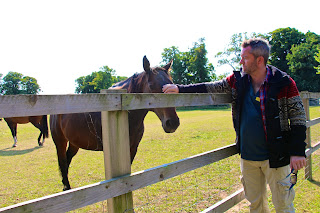 Last one – bye bye beautiful horsey.
He looks sad doesn’t he.
Sad to see me go do you think?
If not sad to see me go why the long face?
“Cos I’m a horse numb nuts!” Back to top
Beautiful beautiful Manorfields