Home » Mine and Ollie’s first day in Cambodia
0
SHARES
ShareTweet
Subscribe
Ollie and I decided to book SilkAir/SilkAir so ended up pretty much with whole day to ourselves in Phnom Penh as the other guys in the end didn’t arrive until approximately 5pm.
So what did we do, Ollie and I, on that VERY hot 35 degree day in Phnom Penh.
Hmmm perhaps best to say what didn’t we do. OK here goes.
Arriving at the Hotel Ohana, a first stay for me, I realised exactly where we were located. And what a location. Right on the local food market doorstep, a spit from FCC, right on the Meekong River – seriously a BEAUT of a location for an hotel.
Off we go to the market for a beginners, virgin to Cambodia tour for Ollie. One thing caught my eye.
Everywhere in the world (apart from certain countries for religious sake – Halal) you find baby pig. Philippines it is lechon leche, Bali it is Babi Guling etc etc. Well here it is Cambodia style. Now that looks absolutely YUMMY. 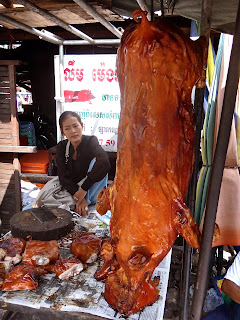 But where were we heading?

I had to deliver on a promise. For followers of my food blog;
http://islifearecipe.blogspot.sg

This is the breakfast on day one in Cambodia. Street food style. Beef, curry noodle soup – a famous and extremely popular Cambodian breakfast dish. Great photo below of me and Ollie with the street in the background, but what you don’t see is the massively sprawling fresh produce market straight in front of me and the circa 100+ locals to my left munching on their breakfasts. So what’s it all for, tuk tuks, wandering markets etc.

Well here it is. This stuff is nectar. A light curry gravy on glass noodles, with slow and long cooked fall apart beef pieces with soft soft tendon that melts in your mouth, some shallots, some chilli and cane sugar (I think) condiment and a few squeezes of lime.

I asked Ollie to pose so you can see it. Believe me 30 seconds after this shot those chopsticks were a BLUR. 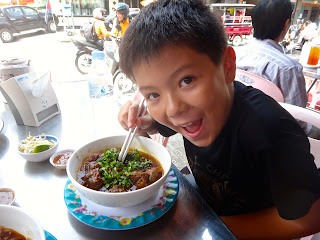 If ever you get to Phnom Penh, try this! Ask tuk tuk to take you to 126 hawker/restaurant. Sit chill. OK 1000am is good, maybe even an early local beverage with this to start to day off with a bang. That local beverage I recommend is called Angkor and it is known as beer (ha ha!). This stuff is awesome.

In the words of the book Singaporean food book, The Makansutra, this is “die die must try” food!

Nicely full we took a very slow walk in the heat to the temple and palace for Ollie to see first hand. But before that a quick look at a temple on the way. This place is a beautiful buddhist temple called Wat Ounalom, on the Sisowath Quay.

Apparently this is the most important temple, or Wat, in Cambodia as the centre/hub of Cambodian buddhism. This place is huge, with over 44 separate buildings, and it was 1st established in 1443. Amazing!

The Khmer Rouge damaged it, as they were pretty much anti-everything before their “day one”. They have since restored it. And here’s an amazing fact – apparently the main complex has a stupa (tower) that contains an eyebrow hair of Buddha.

Maybe he was there one day plucking and left one behind?

Why an eyebrow hair I just don’t know, but still interesting! 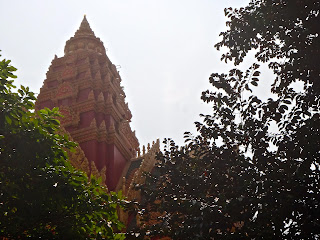 Here’s Ollie sat on the steps at the front of the temple. It really is impressive isn’t it? 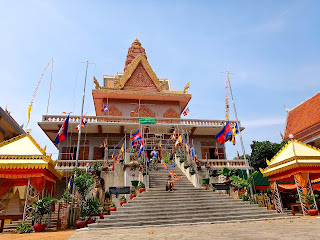 Then to the palace. Roads closed and quiet that time of day as you can see. Big picture of the deceased King on display for all to see.

The Royal Palace or to give it its full name Preah Barum Reachea Veang Nei Preah Reacheanachak Kampuchea (phew), let’s just call it the Palace from now on is massive with lots of separate buildings such as Silver Pagoda, Throne Room, Moonlight Pavilion, Khemarin Palace etc. all surrounded by beautiful gardens of tropical flowers.

The King’s have been living in there since the 1860’a with of course a time of absence when the Khmer Rouge were doing their terrible thing. Basically this was build because King Norodom decided he liked Phnom Penh better than Oudong as capital city back in mid-19th Century. Hey presto I need a new house please to the foreman. The a quick spin around the museum. Some beautiful artefacts in here, too many to show off so I suggest you get your skates on and visit yourself. Oh alright alright one example for you to see to whet your appetite.

Also some amazing stone tablets with early scriptures/writings back to AD400, incredible to see. 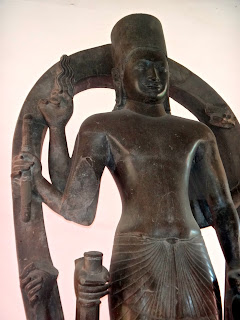 Next Mr Kennett and I are feeling a little peckish and thirsty for sure, so I wanted to show off the FCC to him. This was lovely we sat alone, father and son, in the lovely, breezy, cool 3rd floor of the FCC (Foreign Correspondent Club) on the Mekong River.

Ollie sipping cocktails, me having a few beers.

Ollie on iPAD, me reading a book. That calm, serene environment was all soon to change – ha ha – the bus arrived with the rest of the gang on it. BOOM.

Kid soup – no it’s the pool at the hotel, me on guard duty with a couple of the other parents.

Crazy thing standing here met some new faces that actually were completely not new faces, as well as some legit new faces. John for example, I think 15 years in Singapore, kids been at Eton same as Ollie, attended loads of assemblies etc but I have never seen him. Crazy! We’ll fix that moving forwards! OK let’s get the kids focused by getting them to pose for photos, very nice kids. Still kid soup though. But they were having such fun, and a much needed cool down from a VERY hot evening. Final thing for the day – where to have dinner with 40 or so people, that’s a big task. So off to Titanic on the river front, a local restaurant that is very long as you can see below. So more than enough seating and capability to get 40+ orders and be able to fulfil them with very yummy food. 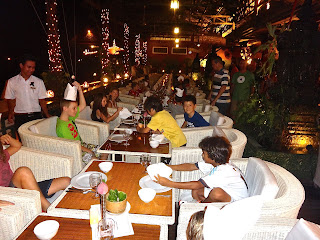 However saying that, the kids ordered 12 margarita pizzas in one order. That clearly caused an issue in the kitchen with one pizza oven. But all was good in the end, everyone ate well and had fun on the process. The kids were ace, interacting so well with each other and also other dining guests. Josh and Bec even had people come to them to say what wonderfully behaved children they were. Proud parent moments kicked in of course for all at that point. THEN TO BED, as up at 5am tomorrow for the trip to the orphanage. But what a first day!
0
SHARES
ShareTweet
Subscribe

Back to top
Quite a sad on this, but also with some humour

Wow this is a BIG one, our first full day as a group in Phnom Penh