Home » Oh my GOD – No1Son does it again – AMAZING!!!
0
SHARES
ShareTweet
Subscribe
For the past few months Ollie and his school chums have been locked in a bunker with the new Head of Music from the school, Ms Akiko preparing for the 1st musical he’s really ever done. From the realms of Dr Seuss, came to us tonight “Seussical Jr”.
OH MY GOD.
It was just amazing – a message to all the parents of these amazing children that we witnessed tonight – “we should be the proudest people on the planet!”
It was just incredible.
The songs were beautiful.
The jokes were nailed.
The acting was just wonderful.
The interactions of the kids in their characters was London West End quality.
I AM the proudest person on the planet – Ollie you knocked it out of the park my friend. Goodness me. And just to add for those that didn’t know, he came home from school this afternoon with a 38.2 degree temperature and was still able to go out there and do what he did!
I am in awe, I am gob-smacked, I am speechless – and believe me that does not happen very often. I’d love to share some video footage but this flipping blog is still playing up.
But as they say a picture paints a thousand words so lets have a look at some of the highlights from the show together.
The opening scene, here comes the Cat in the Hat (Ollie) interacting with his co-star Dev. And off goes the song “Oh the things you can think…” 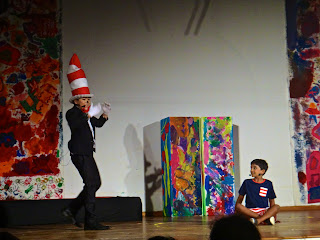 Doesn’t he just look amazing!
Matey you are a natural!!! 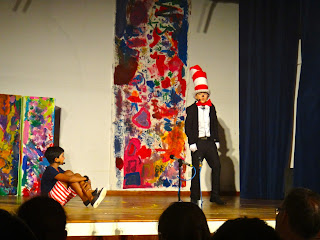 Then out come the supporting cast to all sing the song with him.
These kids were just superb.
Teary eyes of amazement – believe me! Here comes some of the other cast Anoushka (kangaroo), Issy and Eden (birds), Navaan (Horton), the monkeys and the other birds – the animals of the jungle of sola saloo (I think). Now he’s a Dr helping Issy, or Gertrude, to grow a new tail.
So funny, and as I said the kids had the humour nailed – their timing and delivery was impeccable. Now he’s an auctioneer – and poor old Horton sat in the tree nesting an egg was sold to the zoo. Off to NYC he went. Now its a courtroom drama and Ollie is the prosecutor – loved this bit as the Hoo’s come out and they have a singing face off, the poor little Hoo’s trying to make themselves heard. 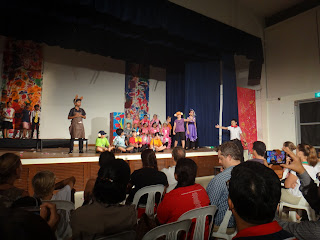 WOW!
It is ALL I can say.
We were all blown away by this.
We’ll be back Friday and Saturday for the next two shows.
Ollie you are indeed a legend my friend! So proud of you!
0
SHARES
ShareTweet
Subscribe