Home » Pop Up means many things – in this case it is indeed book related, and more importantly Micro Brewery related – woo hoo
0
SHARES
ShareTweet
Subscribe
Walking around Margate, and taking trips to the countryside this trip it seems that the pub industry is decimated. So many boarded up and closed down establishments. Places you would never think would or could go under, but Mum says no one has the money to spend to go out now and supermarkets are pumping out beer at 50% the price – hey presto!
BUT…
DKHNY and I went out last week for a wander round the old town Margate – reminiscing and all that to the old days of young Brian growing up here and starting first forays in to the world of ‘fine drinking’ ha ha. For information too a lot of these establishments were sponsors of the football teams I played for throughout my 14-33 years age.
BUT we walked past one of the latter, namely the Ruby Lounge, holy crap I will NOT be popping in there for a friendly pint. One of those places you walk past and the hairs stand up on the back of you neck – not good. So quicken the pace and exit to the old square.
Where to go, where to go.
“WOW what is that place DK?” says I,
“The Lifeboat, one of the new Micro Breweries that are popping up in Thanet.” says DKNHY.
It looked great from outside, spit and sawdust (literally) inside, stacks of barrels, stacks of ciders and all linked to CAMRA and Kentish things – crisps, cheeses, crab, lobster, beer, cider, even vodkas ALL from Kent – gotta love that! We ended up spending all night there chatting with loads of people, including the really good barman Tom.
Tom introduced us to the ‘sister’ establishment of The Lifeboat. One of those huh, really, we have to go!
So the very next night a party of 4 – yours truly, Mary, DKHNY and Claire went to The Chapel.
Oh yes, me like this place.
Let me explain.
It was an old book shop, The Albion, but is in an old converted chapel – strangely enough Chapel of Mary. Beautiful place, all crooked, stone walled, with those beautiful arched windows of a chapel.
Julian the owner of both Lifeboat and Chapel had a chat with me. He used to work for BP now this, moving back from Paris to live in Margate. Why? To earn money. He realised the need for something new, something quirky to act as a ‘pull’ and boy has he done that. Kentish Micro Brewery Ales & Ciders in a Bookshop – bring it on.
Even smaller world is that this man has a place in Bali and his wife is Balinese – so of course much chat re Asia was had with Julian this night. Small small world! Here is Mary outside the place I went to pray that night – The Chapel.
See the guys inside the shop sat the supping on a beer or 10 of finest Kentish Ale – brilliant!
Doesn’t it look great – well done Julian, quirky was your plan, quirky is what you got my friend! This night as well we had a double whammy as it was ‘open-mike’ singing and we ended up seeing about 6 different soloists and bands perform. Bloody brilliant. I think Julian was using it as a semi-audition of those he’d end up paying for to entertain in his establishments.
Playing out surrounded by books – probably a 1st for these guys too! As well as the punters! Come on check this place out – it’s just crazy.
And yes if you want to come for a pint and a read, you just take a book off the shelf – WARNING make sure you put it back in the right place though as they are in an order – albeit it don’t look like it!
My naughty Mary though put an Indonesia travel book back in the Films section – tut tut! 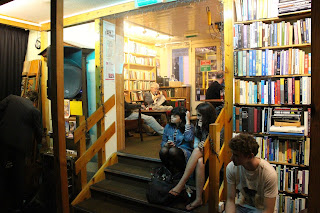 Yes indeed we are having fun.
One of those moments where you sort of walk in and in your head think OMG – then relax and after a few minutes start to realise how ACE the place is you are in. 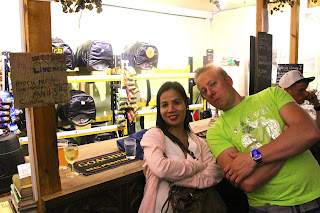 What did Bogey say – “In all the bars, in all the world, you had to walk in to mine…”
Well bugger me – degrees of separation and all that. Quick insight…
Great mate of mine Garry Broomfield pops me a Happy Birthday note on FaceBook a week or so ago. Thanks mate says I, we’re over soon, hope to see you. That was that.
We’re in The Chapel supping a few raspberry ciders and who should walk in? Yep Broom. Unbelievable. So he and his lovely new lady joined us for the evening. How nice was that, and just amazing. This girl with her little guitar was amazing.
Biddi or something like that.
Haunting voice from such an unassuming little thing.
And she is Nepalese, and her Dad owns the curry house across the road. 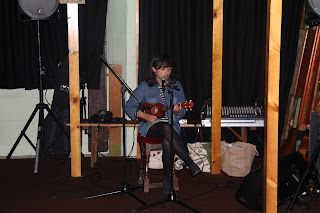 We popped upstairs to the seating area.
I kept expecting people to say Shhhhhh – seriously feels like getting p*ssed in a library, now there’s a first! Getting busy now.
Here’s a wee scan downstairs from upstairs. 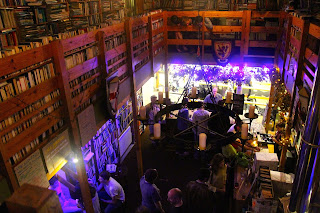 The Singaporean’s relaxing in the books.
Nice photos DKHNY. 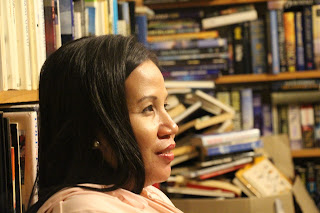 Me and Broom.
I think on his last legs here as he had had quite a few with no food yet.
Time to go Mr B – great to see you mate.

Get this, day after was golf for the Magoo Trophy at North Foreland Golf Club.
We finish playing, quick shower, pop for a quick pint and bugger me who walks up attending a wedding at the golf club – yeap Garry. OMG. 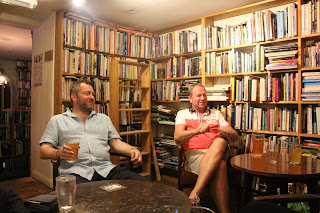 DKHNY playing about with the camera clearly.
I popped outside for some ‘fresh air’ and he leans out the window for a snap. Final one for this bloggy.
The entrepreneur himself – Julian.
Hoping to meet you again mate, perhaps even in Seminyak, Bali with the families!
Thanks for a wonderful time Broadstairs, The Chapel, Julian, Garry and of course DK, Claire and my Mary. 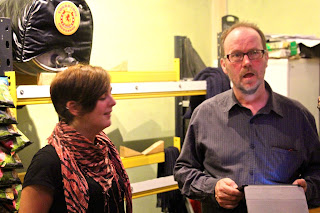 Back to top
Southend and Uncle John and Aunty Janet here we come!!! Prepare yourselves!!!

A trip to Broadstairs with Claire and Darren…