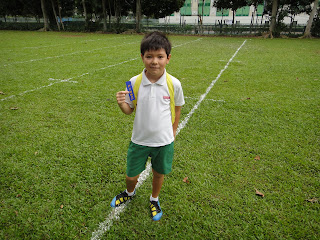 It’s Sports Day time again – whoops Mary, Amy and I turned up a little late and missed Ollie in the sprint race, but amazing is that he came first in his heat – check the ribbon he had awarded. Well done Mr Kennett, and bless he let his sister have it.
Shame though is that those with the yellow sash, The Lions, and Ollie’s team came last despite his efforts. What we did see was sack race, long jump and javelin.
I would really like to draw your attention to the video clip on his sack race. I was doing some general video when whoosh a flash of yellow sack goes flying past. I couldn’t keep up what was it, it was like a speeding yellow bullet, a speeding yellow train, a supersonic yellow jet plane – but no it’s Ollie in his sack race for the yellow team The Lions.
Watch him go, just amazing!
Funny as well was long jump as some of the kids would literally run and jump and dive head first, arms outstretched landing on their face in the sand. Then poor little things had to be explained to that, sorry but it’s not the first bit of you that is the measure it’s the last bit, so your feet. Whoops.
So we did see a fair bit but also sadly missed a fait bit. Amy was also there, and if you listen closely on some of the video clips you will certainly hear her screaming, I think, that she is “The Winner!!”
0
SHARES
ShareTweet
Subscribe

Back to top
Well that was outside, how about inside!

Lood Daddy I can do the splits!!!