How brilliant was this today. Again our little Red Dot shines with the ‘content’ it brings in to entertain us, despite this damned Covid. And this even was up there with the best yet. This took me back to being a kid. This took me back to being amazed back in 1977 as a 9-year-old watching this incredible life-changing film, Star Wars. One of my all-time favourite actors emerged from this, in Mr Harrison Ford. A film series that became the ‘must appear in for all the A-list, including just standing there as a Stormtrooper in one scene in one of the latest spin-offs, right Mr Craig… So to be able to walk into this exhibition and be in awe as a 52-year-old and have my 19, 12, and 7-year-old all feel the same is an awe-inspiring thing. Star Wars still has its MAGIC!!!

You have until 13th June to experience the magic folks. This is a must-visit for young and old. It really is just a brilliant thing to do with your family.

Let’s hear from the organisers at Marina Bay Sands;

“Create your unique Star Wars™ character in this interactive exhibition displaying close to 200 artefacts from the original Star Wars™ films.

Catch the final stop of STAR WARS™ Identities in Singapore. Get up close and personal with original movie props, artworks, costumes and models of the famed starships, the Millennium Falcon and the Star Destroyer from Star Wars™.

Learn more about the creative process of movie-making from early concept drawings, storyboarding, model making, through puppetry and costume design. Follow iconic characters such as Luke Skywalker, Darth Vader, Han Solo, Princess Leia, Chewbacca, Yoda, R2-D2, C-3P0 and see the personal choices that they made that helped shape their identities.

Who would you be if you were a character from Star Wars™?

Journey with us into the Star Wars™ universe – explore and share how each facet of your life, your origins, influences and choices determine…

What forces shape you?”

“A long time ago in a small country called Red Dot far, far away….” 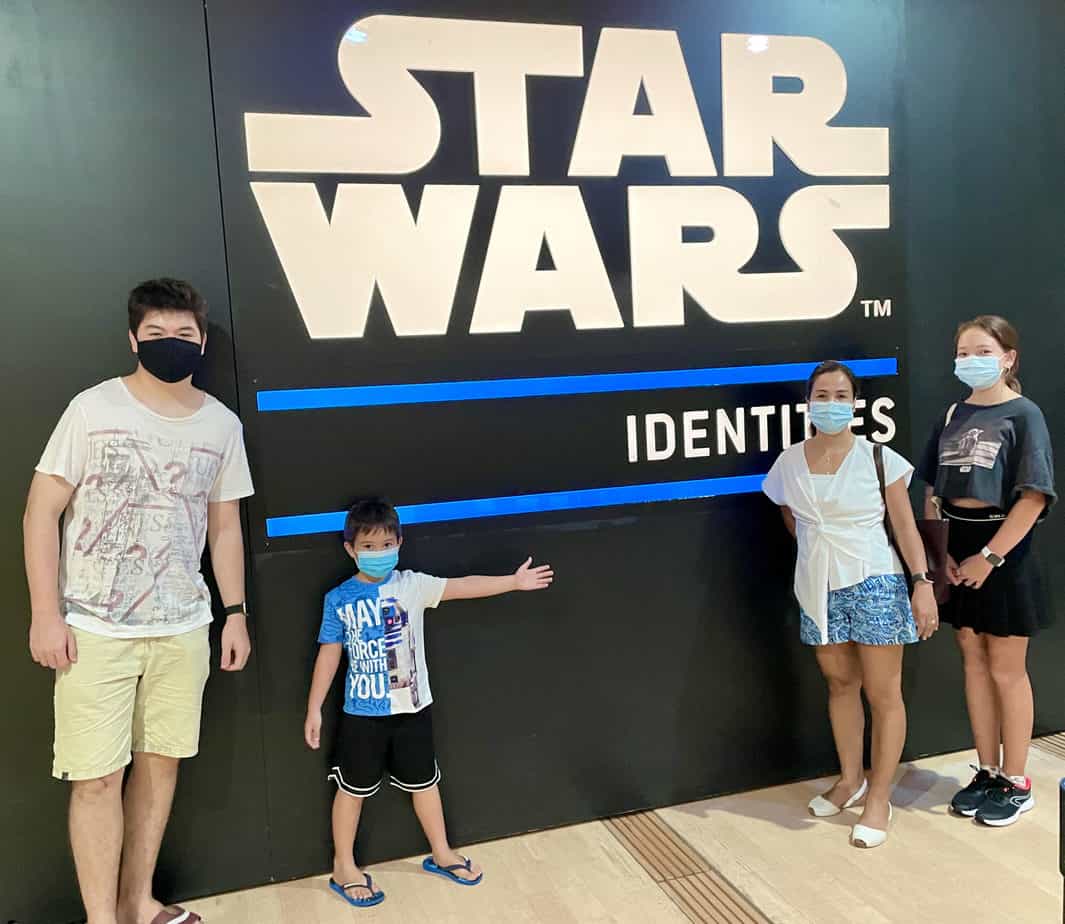 I kid you not I have goose-bumps… 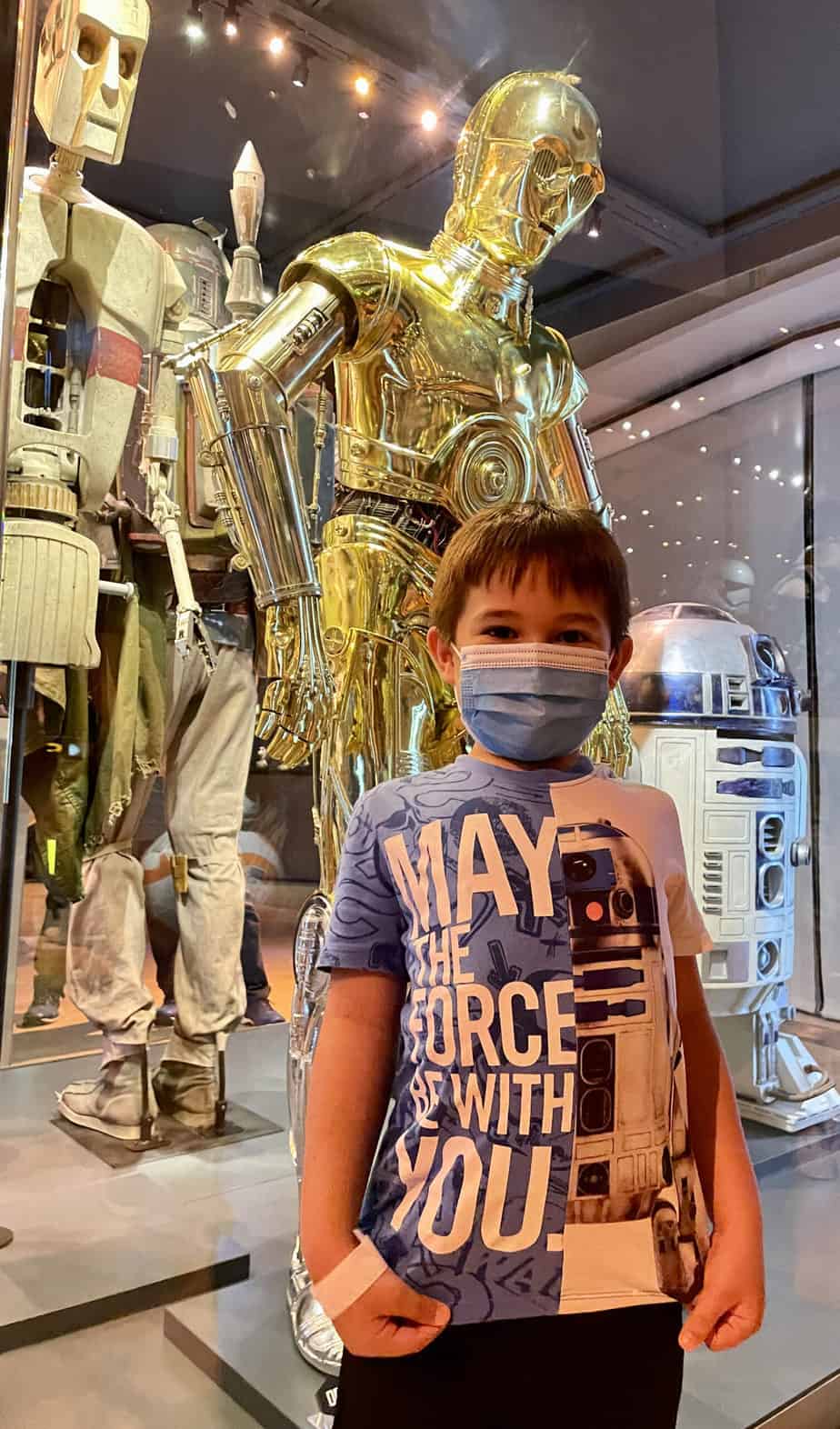 OMG, OMG, the actual C3PO ‘costume’ with my very own little droid iPeePeeYo. 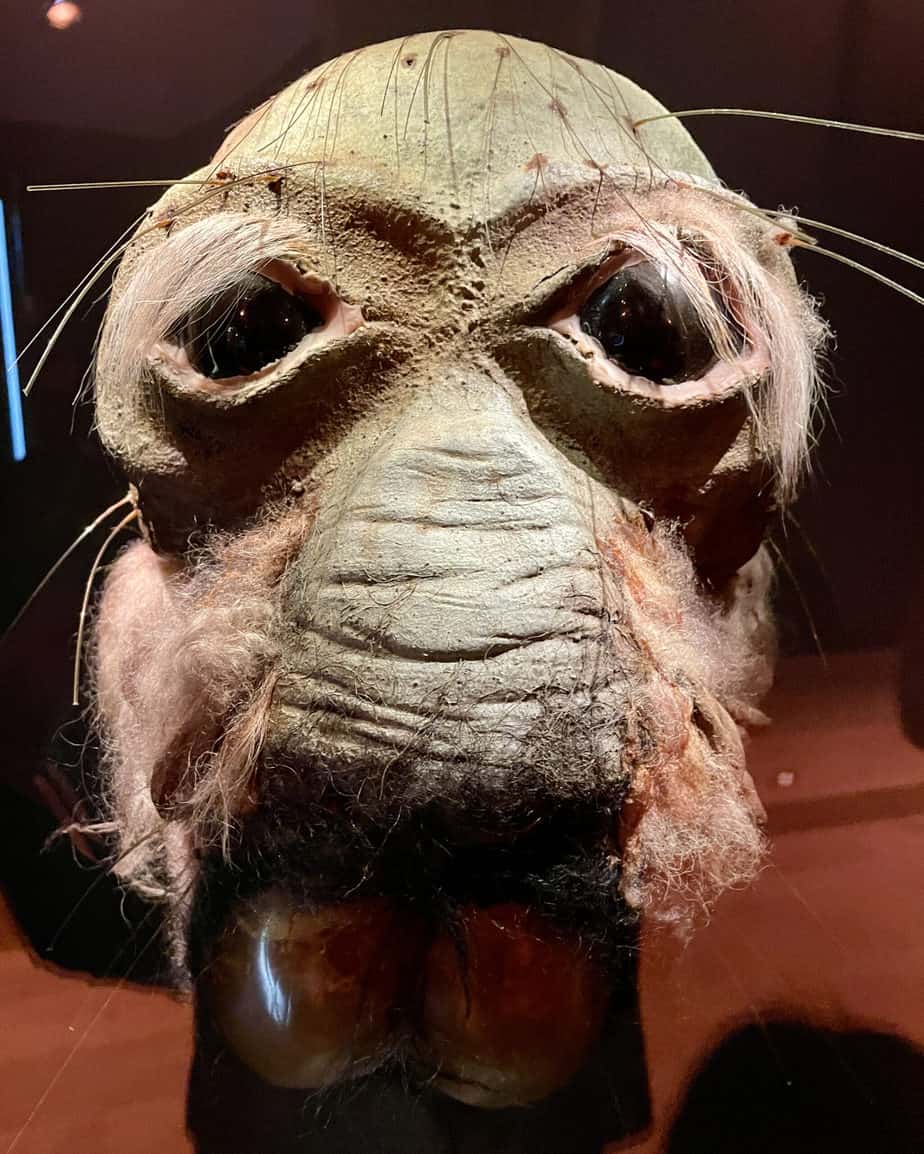 A little rough around the edges, but the original mask of the alien in the Cantina scene when Obi-Wan cuts the arm off with his light-sabre. Remember the scene? Oh my gosh, this is history!!! This is Ponda Baba. I could lend him my arm sling now if he needs it. 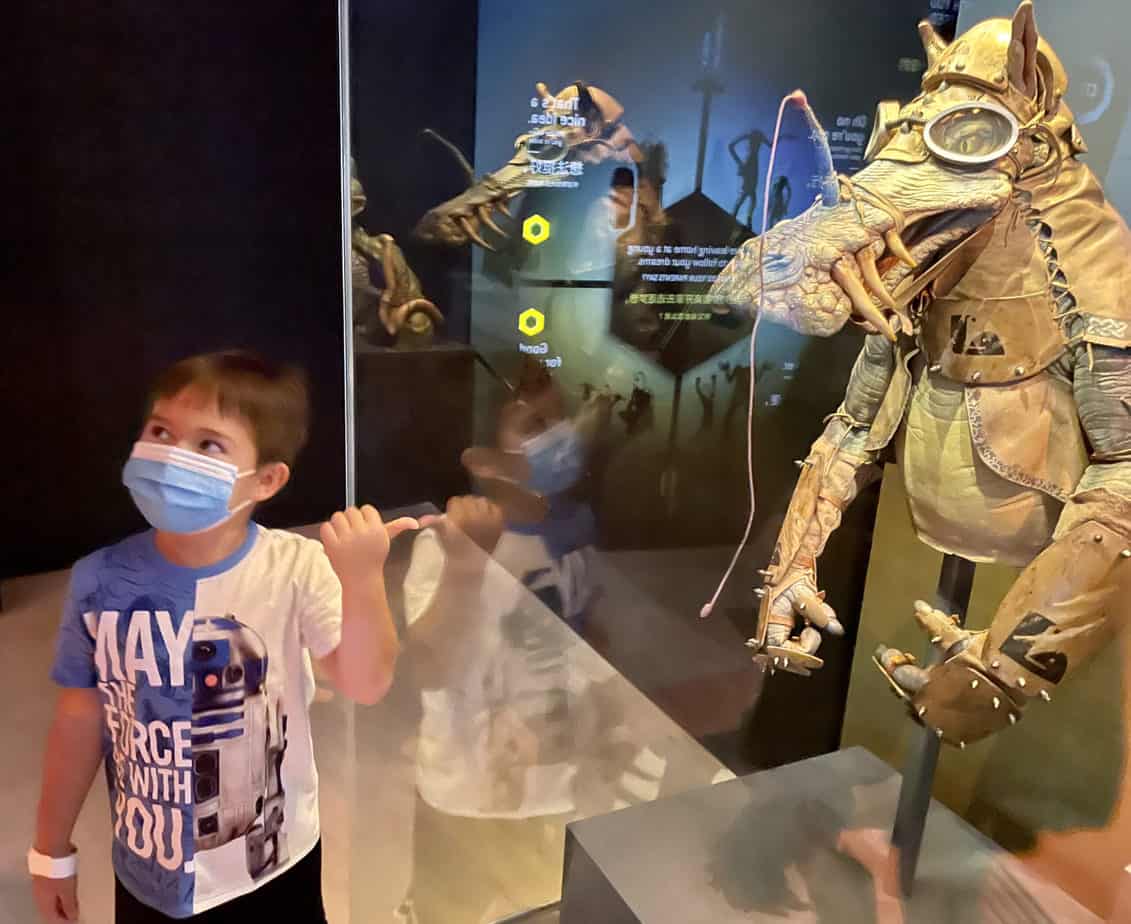 Being a Star Wars purist, I sort of lost my mojo with the latter ones until Han and the crew came back to our screens. But, Jude Jude loves it anyways. 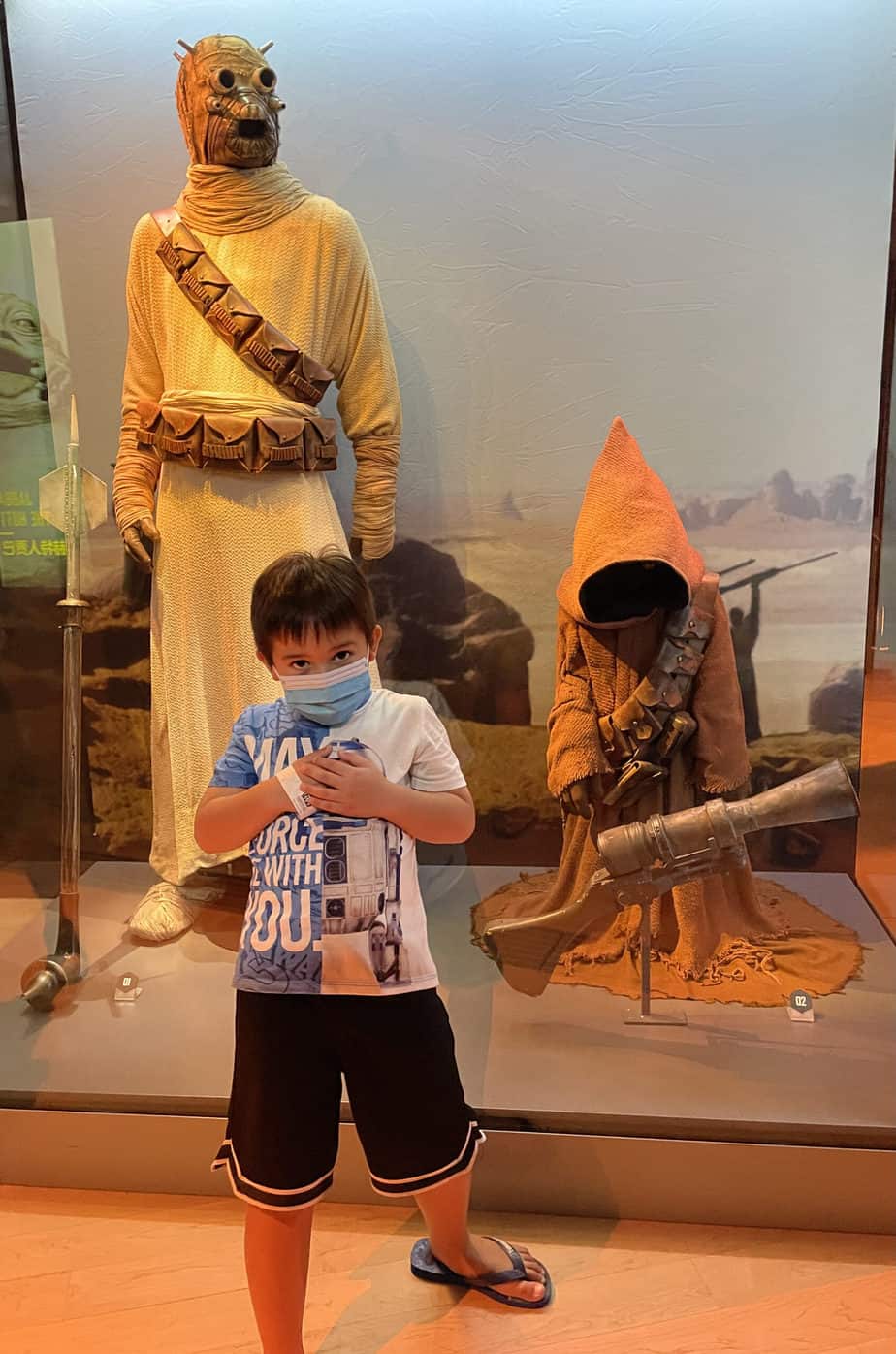 I am just watching The Mandalorian series with Jude Jude now and that is epic. I love Jon Favreau since Chef the movie, so this series was one I had to watch and my little TV-buff buddy loves it too, making it even more enjoyable to watch. And, in that very series, our mates here appear a fair bit – The Sand People AKA Tusken Raiders and the little mischievous Jawas. Jude is pretending to be R2D2 after the Jawas shot him.

Oh my gosh. The original (only surviving part) animatronic eyes of Jabba The Hut. The largest ‘robotic’ character they built for the Star Wars series I believe. You can see all the electronics behind these that had the film engineers and the likes of Frank Oz fiddling about with them. The eyes have it. 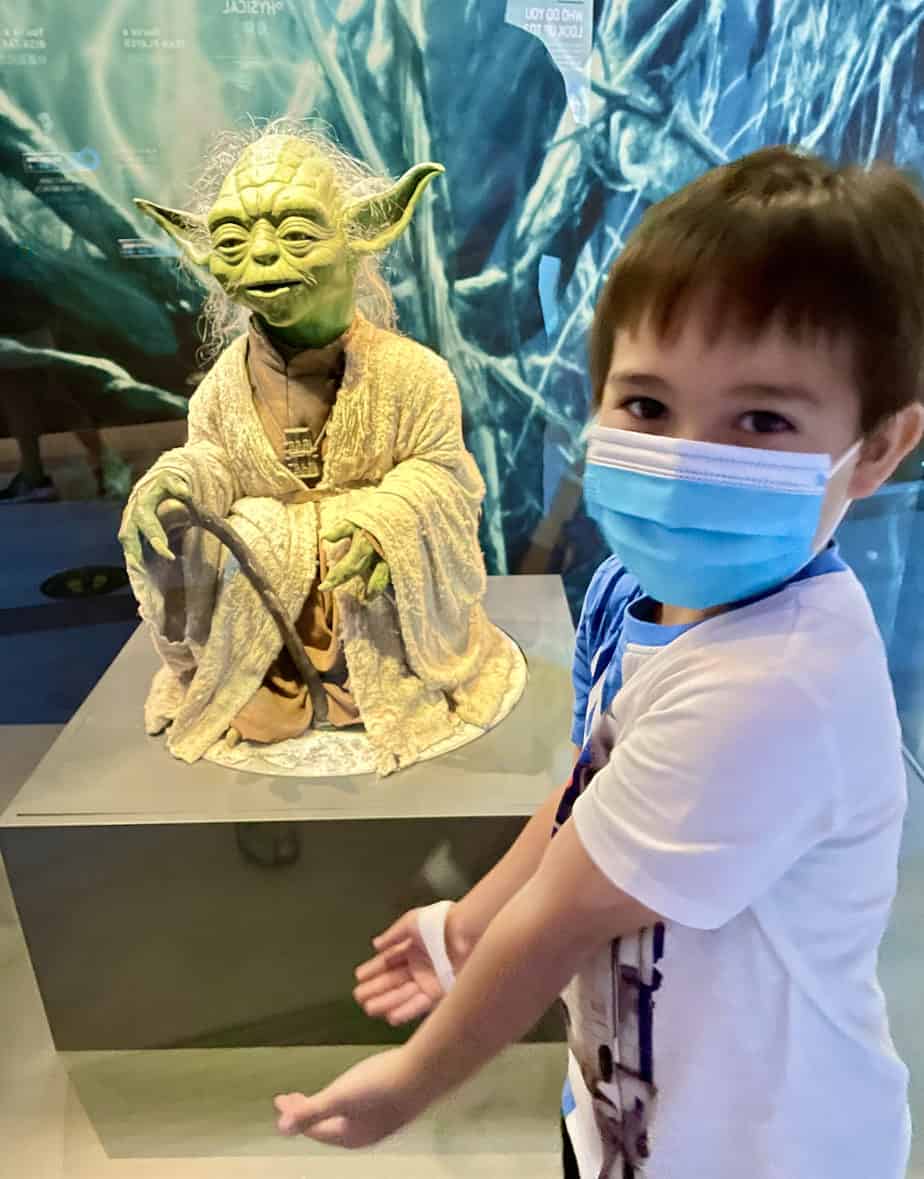 And speaking of Frank Oz here’s something he’s had his hands up. The original Yoda from The EMore Strikes Back. This is history right here. “Hrrmmm. His new Yoda BFF Jude Jude loves.” 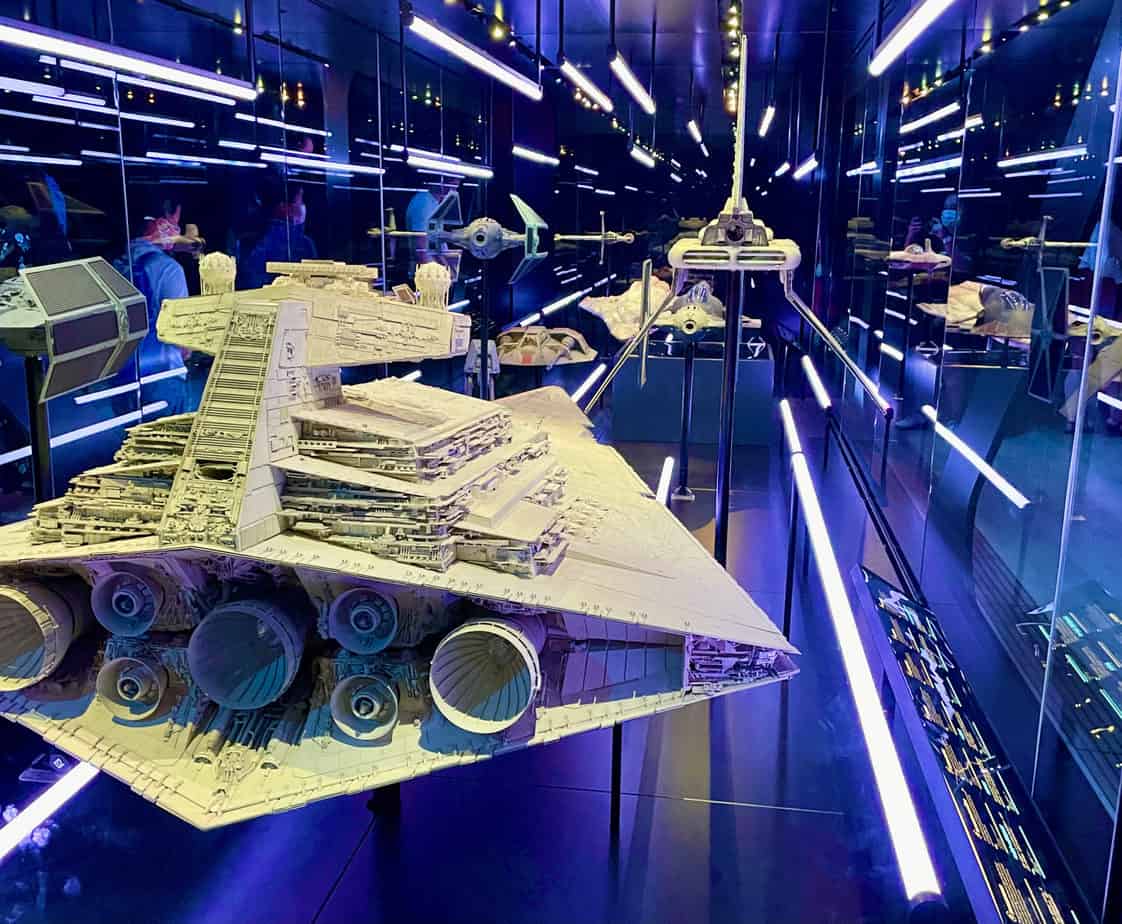 OMG, OMG, OMG… The original models of all the space ships in the films. WOW!!! My brother would love to see this stuff as much as I. Incredible to think that this thing was that very first HOLY SHIT scene as a nine-year-old when this was chasing down the ship with Princess Leia in it. This is the very same model. WOW!!! 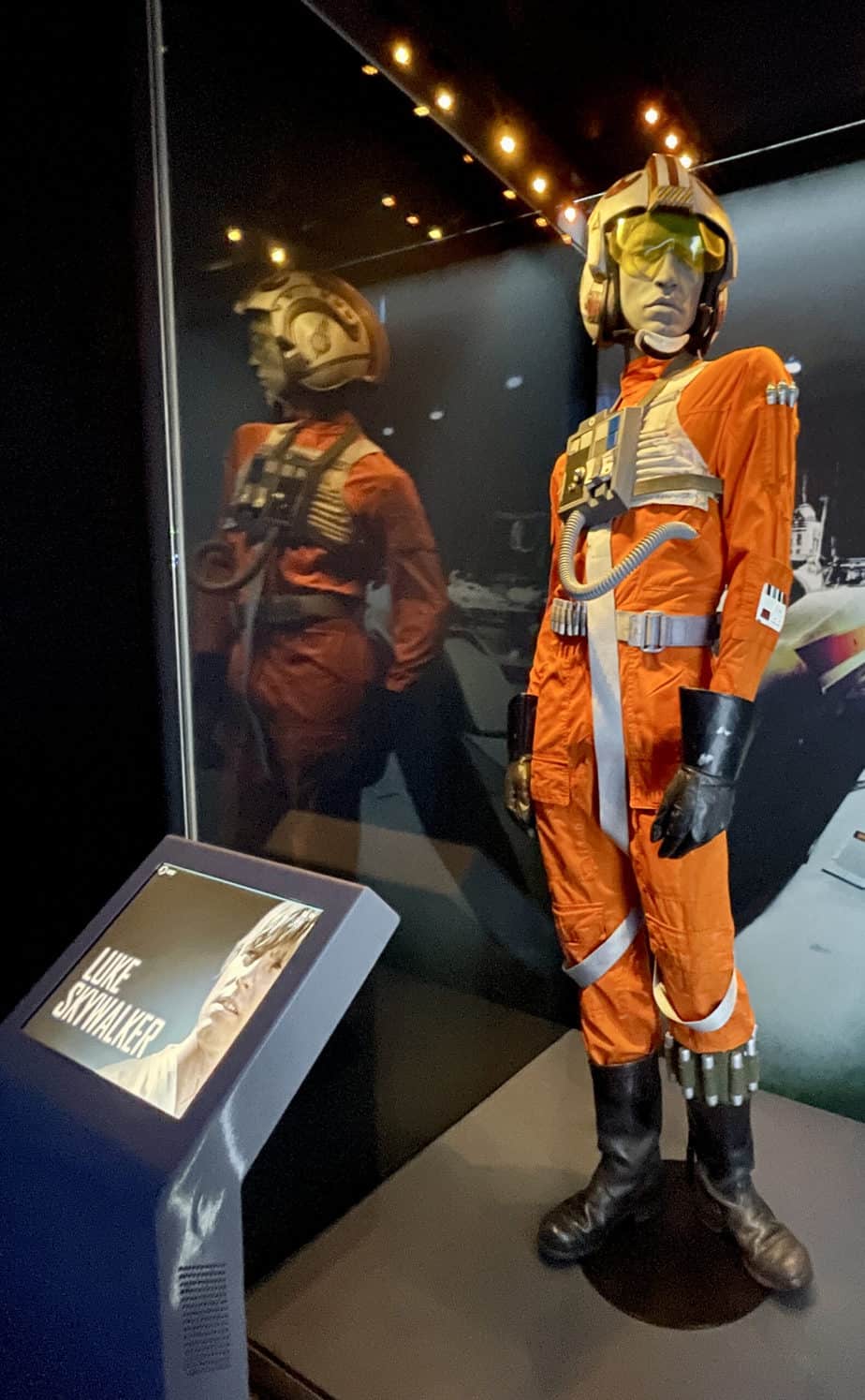 Not sure Luke would be too happy with this manikin. Just me or is this MASSIVELY camp. “Oooooh go on mate, let me play with your light-sabre…” “Luke Skywalker, dressed by Grace Brothers…” “Ouch, right up me X-Wing…” “Look if I bend over you can see my Death Star…” OK, enough already Brian… Here’s some Star Wars trivia though – his original name on the artist’s impressions was; Luke Starkiller. 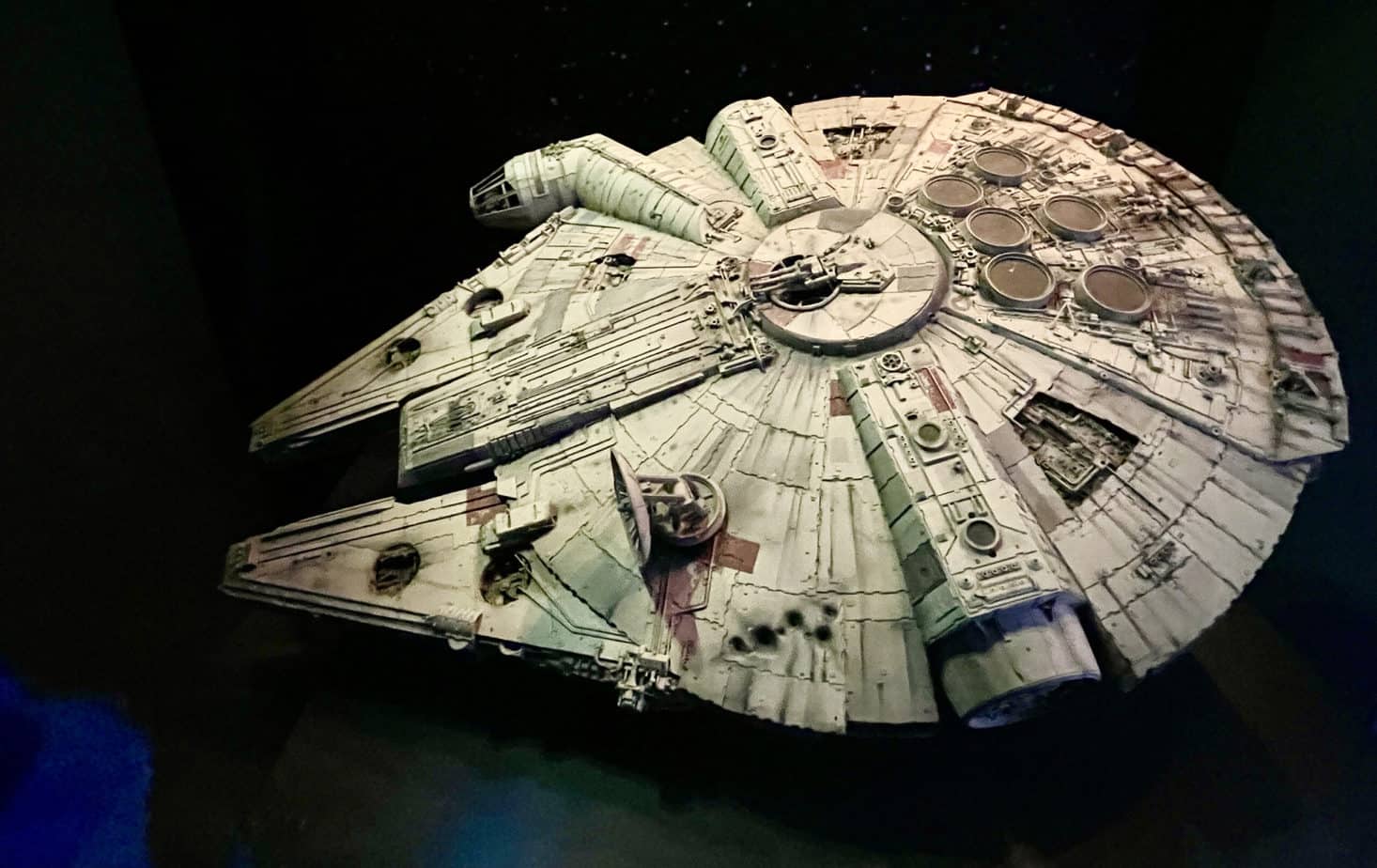 This sits on holy ground. This is the very first model of the Millenium Falcon. The best space-ship ever imagined and put in the minds of us all in 1977. WOW!!! Designed by a chap called Joe Johnston. 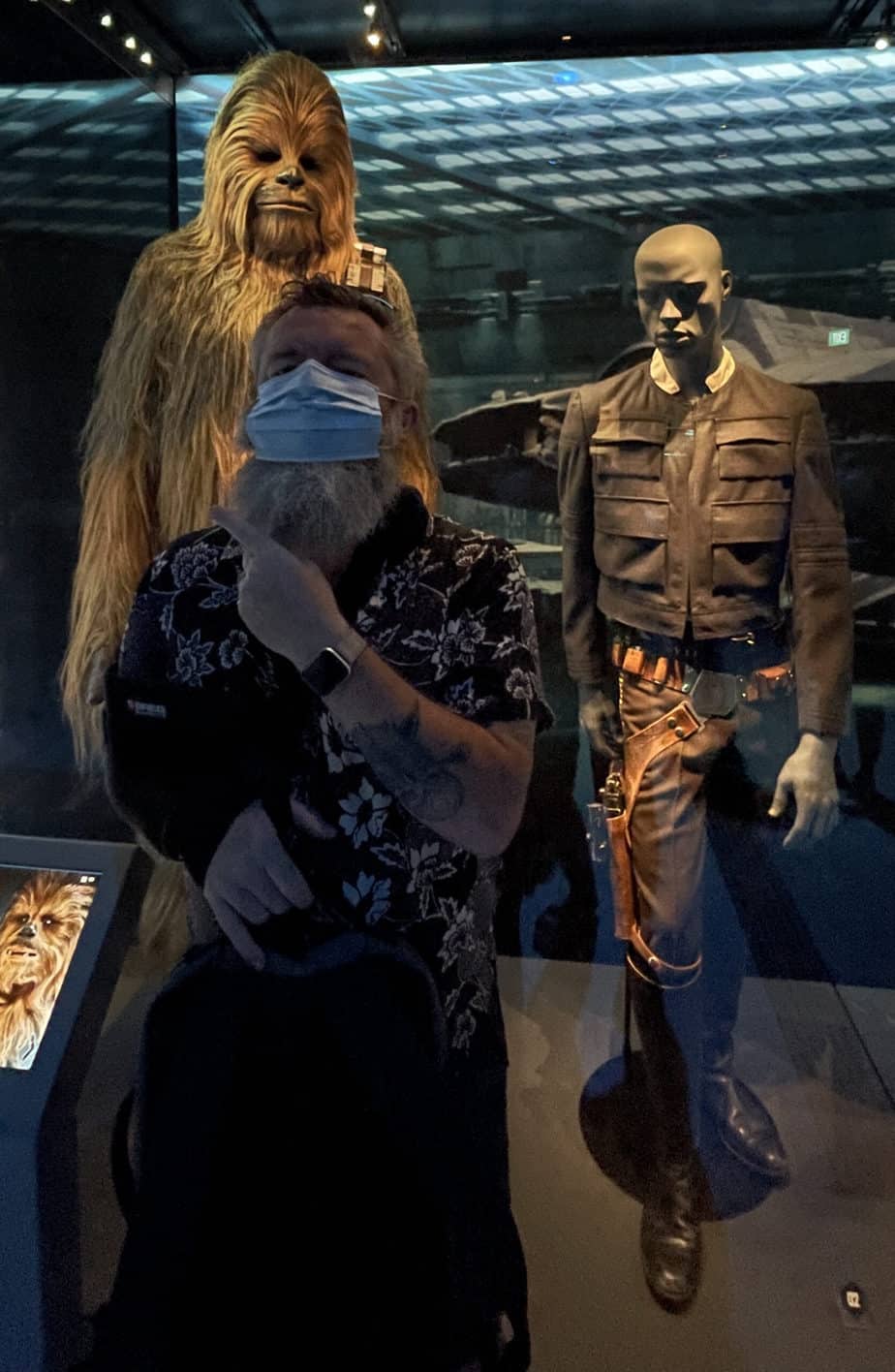 My FAVOURITE place in the whole exhibit. Han’s original costume and Chewie, my bearded-buddy. I want a group hug. “Han Solo and Chewie so much I love. My favourite characters they are. Yes, hrrrm.” 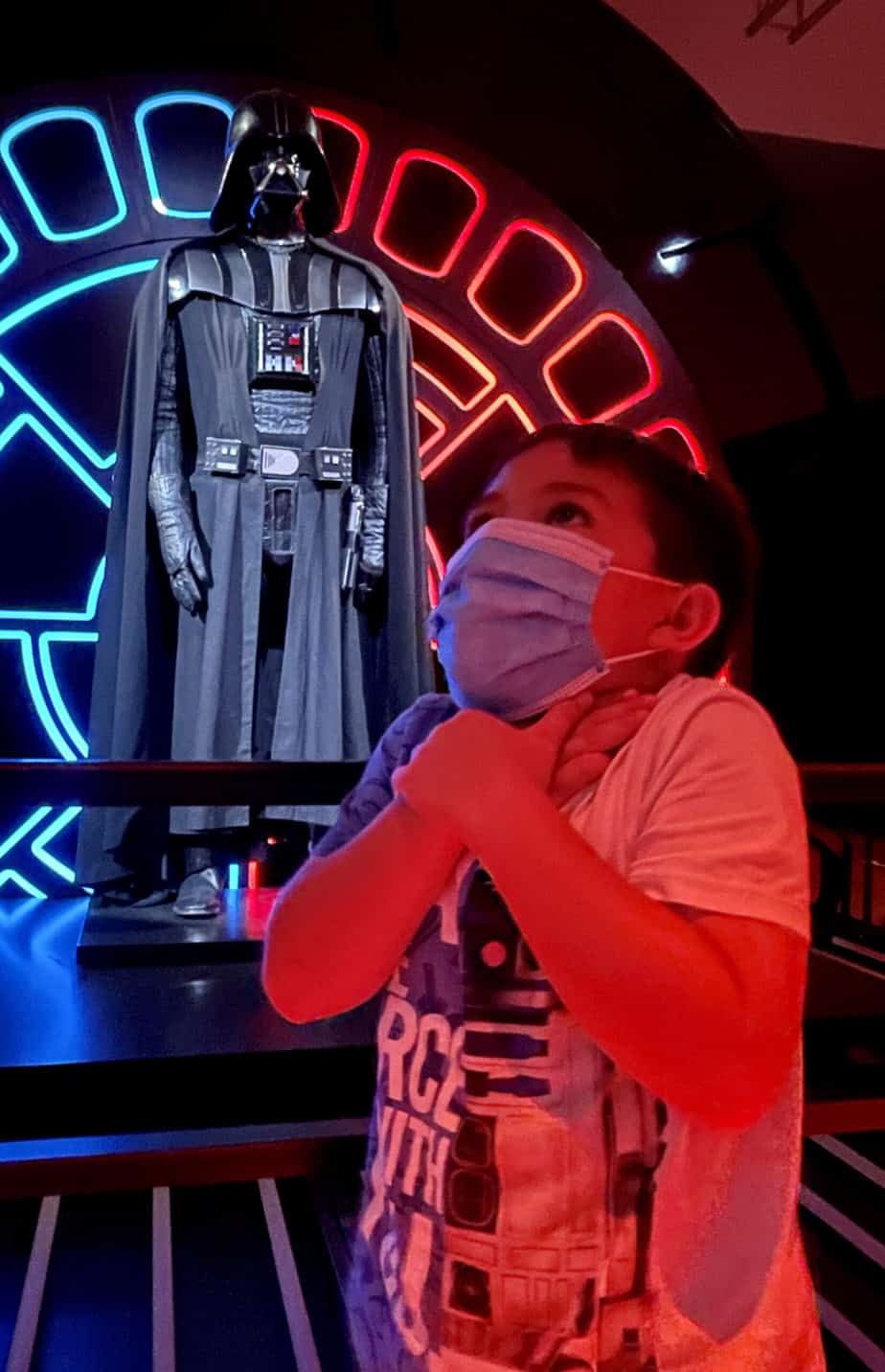 Oh no, the Dark Lord has iPeePeeYo in a thought-controlled throat choke…

The experience is all interactive too. You get a wristband that is IOT enabled and you have to ‘tap-in’ at 10 stations around the exhibit, interact with the content, which then creates a Star Wars character just for you, with your home planet, your mentor, your friend and your favourite past-time. This all gets represented on the screen when you leave the exhibit, as you can now see from the below. Star Wars GENIUS in action again. Oh yeah, and you type in your email address and you get these personal profiles send to you in seconds. It really is genius!!!

iPeePeeYo actually wants to be hairy and a fighter pilot. Great to see Han mentoring him too. Awesome!!! 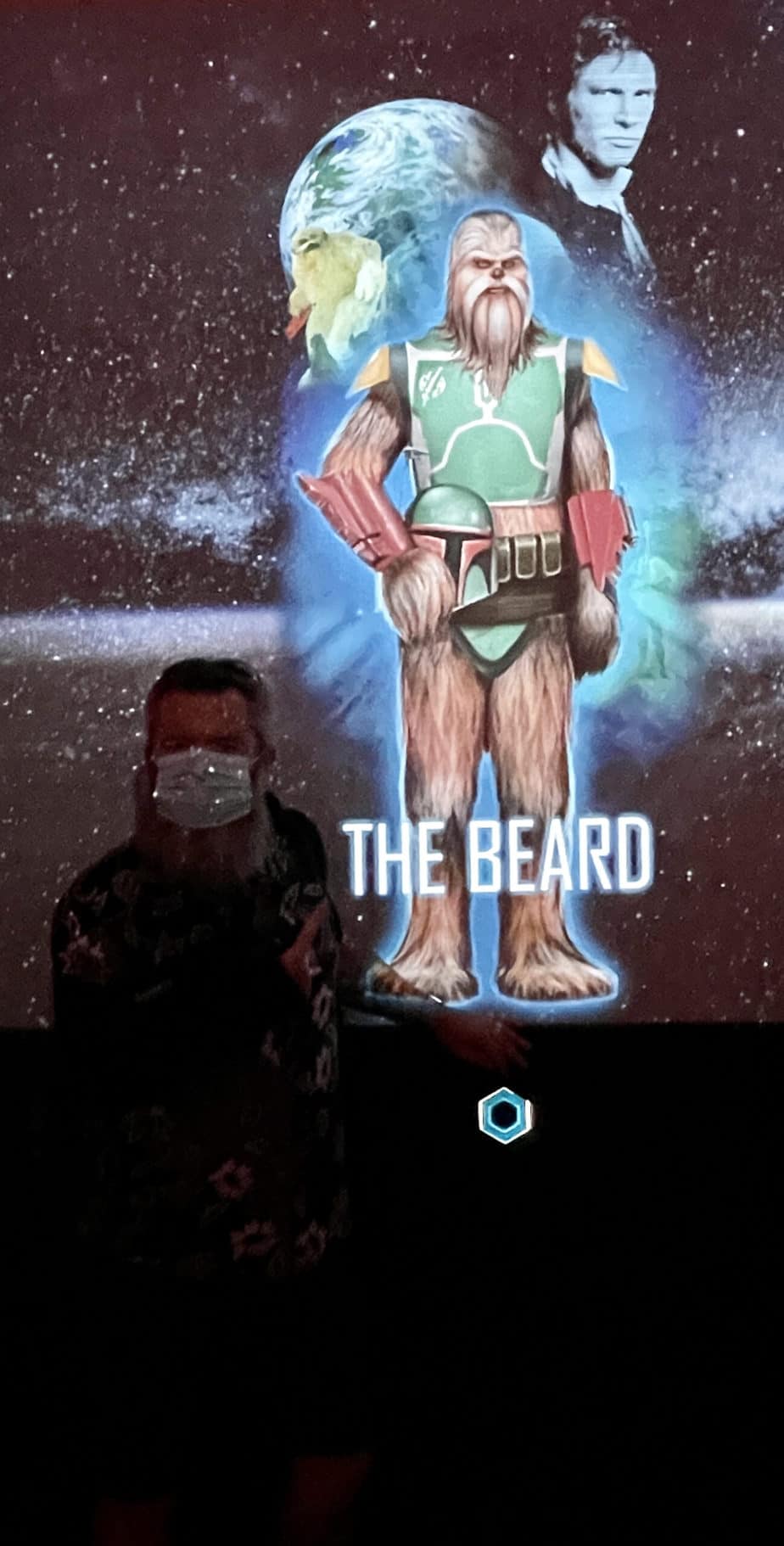 Here is mine before my monumental beard trim… Everything hairy it seems is aligned to my character apart from my mentor, Han (of course) – Wifey is my friend but her neck/head thing so long you can’t even see her there… like being mates with an alien giraffe.

#1 actually goes Dark Side… The only one. Why is his name Daft Groin though? Weird? I think he’s massively taking the Sith…

Wifey, AKA Alien Giraffe in a spacesuit. “Does my neck look long in this?” She’ll reach new heights as this character for sure. No goal is too high for her now. Reach for the stars my darling.

Amy chose the one most similar to Boilie EyeLash clearly. Mentored by the Dark Lord, about right for Boilie Eyelash. Wasn’t it Simon Cowell???

And that was that sadly. About an hour of intense enjoyment and memory flooding. What an exhibition.

If you have not been, you must go. Take the family and become a kid again yourself. I thought the Avengers exhibit was good when it came, but this surpasses that and some. Very interactive. Amazing costumes, drawings, models and the like on show. You can’t help but be transported back in time to a younger self. It’s just uber cool. Star Wars Identities @ Art Science Museum. “The best exhibition we have ever seen star wars identities is. Yessss, hmmmmm.” ENJOY!!! 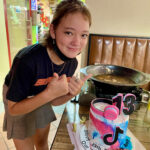 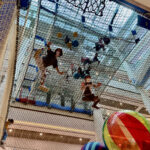 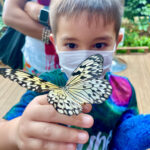 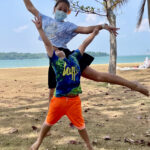 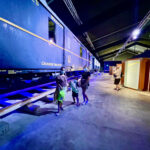