Home » The Oscar’s? Nah better than that it’s the Oliver’s…
0
SHARES
ShareTweet
Subscribe
Two years in the making people.
Two years.
Then our wonderful, dearest friend Sangeeta pulls it out of the bag.
A Gran Plan is going to have a showing. Yes at the cinema. Yes over 5 shows. Yes to 2500 people. Yes it’s all proper like. Yes with popcorn. What was it like.
It was off this planet, believe me. Seriously people if you live in Singapore and have some free time Saturday or Sunday get along to Golden Village, Marina at 1600 or 2100 showings – only 4 left as it is already Saturday today. I will be there again today at 1600.
Sangeeta has changes the film somewhat – or ‘made it tighter’ as she calls it. It is incredible. Music has changed, a new song in the middle, it changes to B&W for effect at a certain point in the film, certain edits etc to shorten but really make it punch high above it’s weight.
It was just incredible.
Sangeeta my friend you should be so flipping proud of yourself – goodness me!!!
It was so funny an experience as nerves and adrenaline were pumping high as you’d imagine. Poor Sangeeta could not even watch the film she was so paranoid and nervous. She seriously has nothing to worry about.
So please book a ticket and come see what potentially is the 1st and last showing of this award winning film, starring No1 son opposite Farida Jalal, of yeah and yours truly for a sort of cameo role too. Come on, how could it get any better right!!!
Let me share the experience with you a little…
“No red carpet? Don’t you know who I am? I am Oliver Kennett, famous actor…”
Dear me!!!
The arrival, Golden Village is a beckoning. Nice that he dressed up huh!!! Two of the actors in the film have a huddle. Yes I was in black tie and jacket, but jeans as my bloody trousers were too big and you can’t wear a belt with em, damn!!! 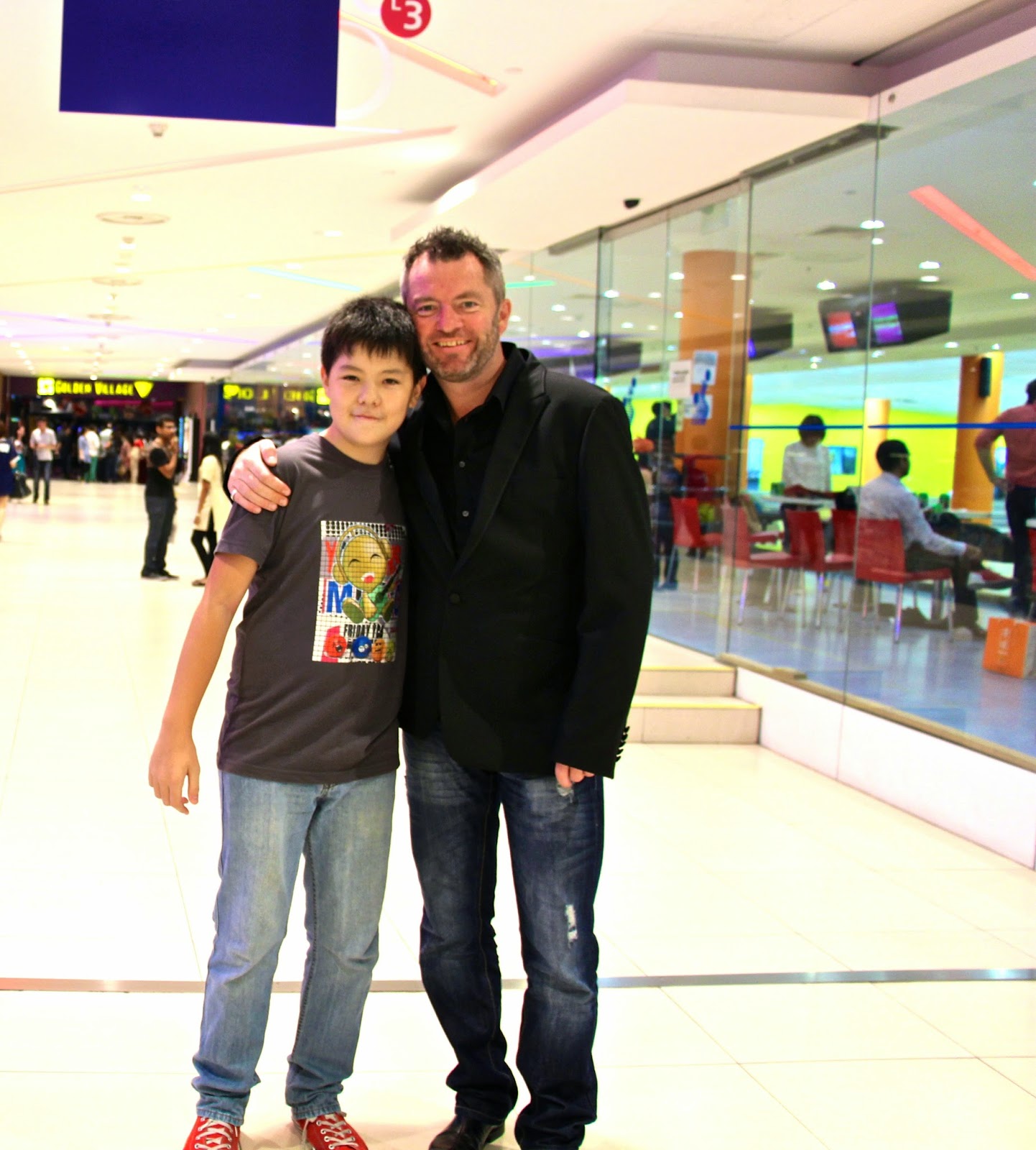 The cast of the kids – how grown up they have all become since the film was made two years ago. My son and daughter right in the mix in here ha ha! Gifts were given by Sangeeta bless her.
Say no more – what a lovely message. 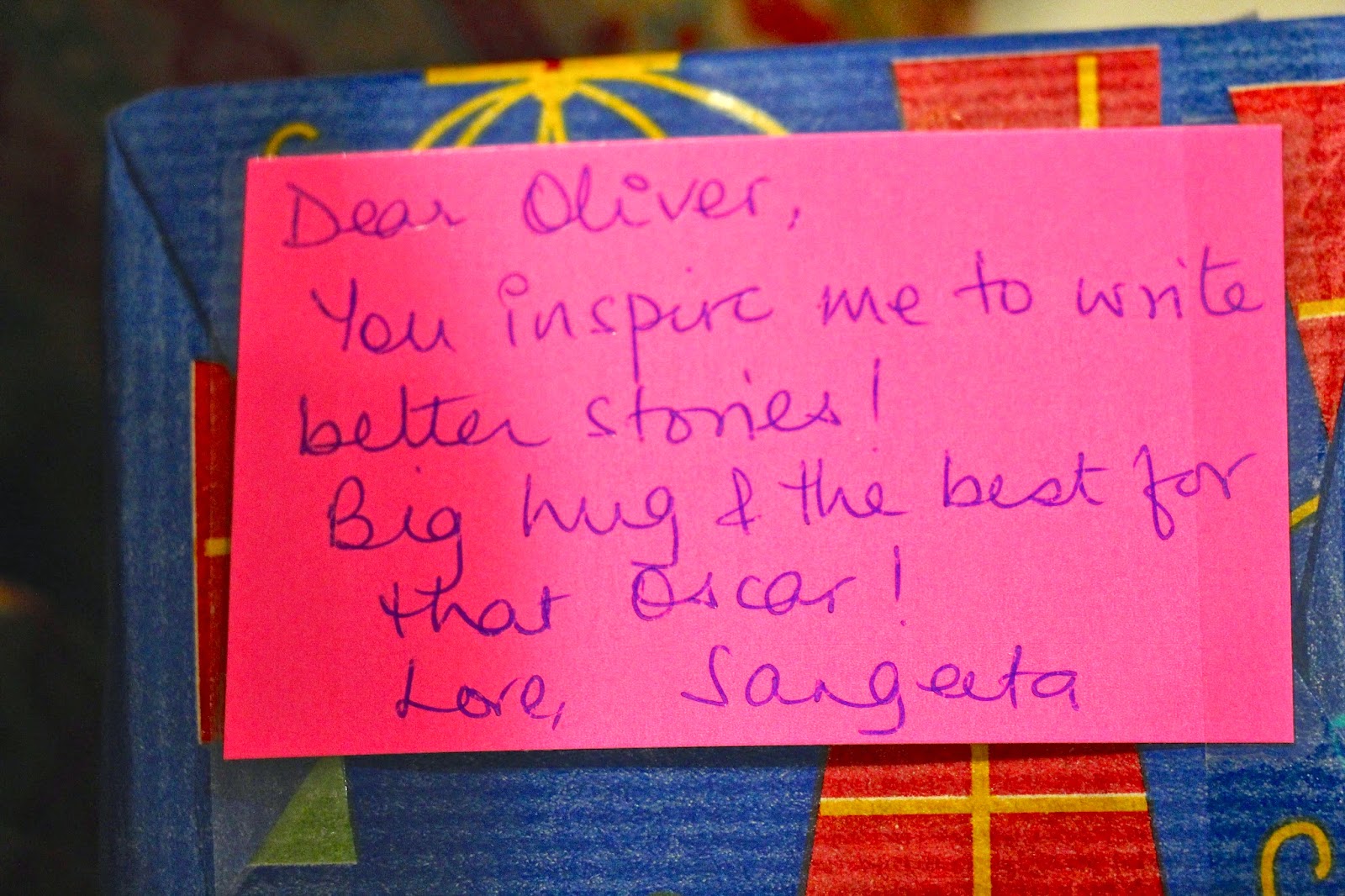 How cool is this seriously.
The bill board has ‘A Gran Plan’ showing at 2100. Uber cool!!! 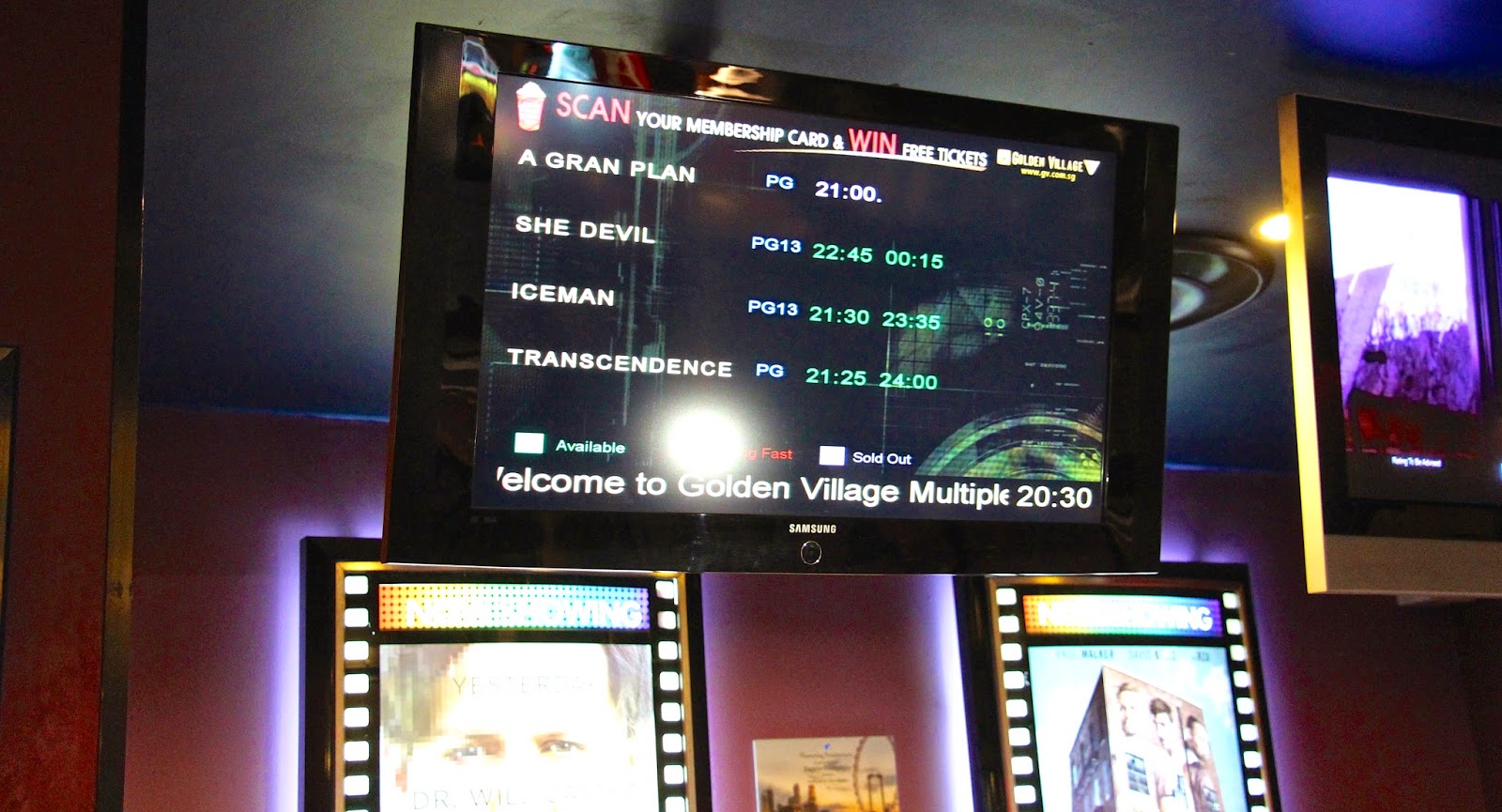 Even the bloody film gets a poster and check this out it is nestled next to Johnny Depp no less. WOW!!! Here they are – the double act.
Our dear friend Sangeeta and her No1 actor for this film, Brian Kennett.
Whoops so so so sorry I mean Oliver Kennett!!! (He He) 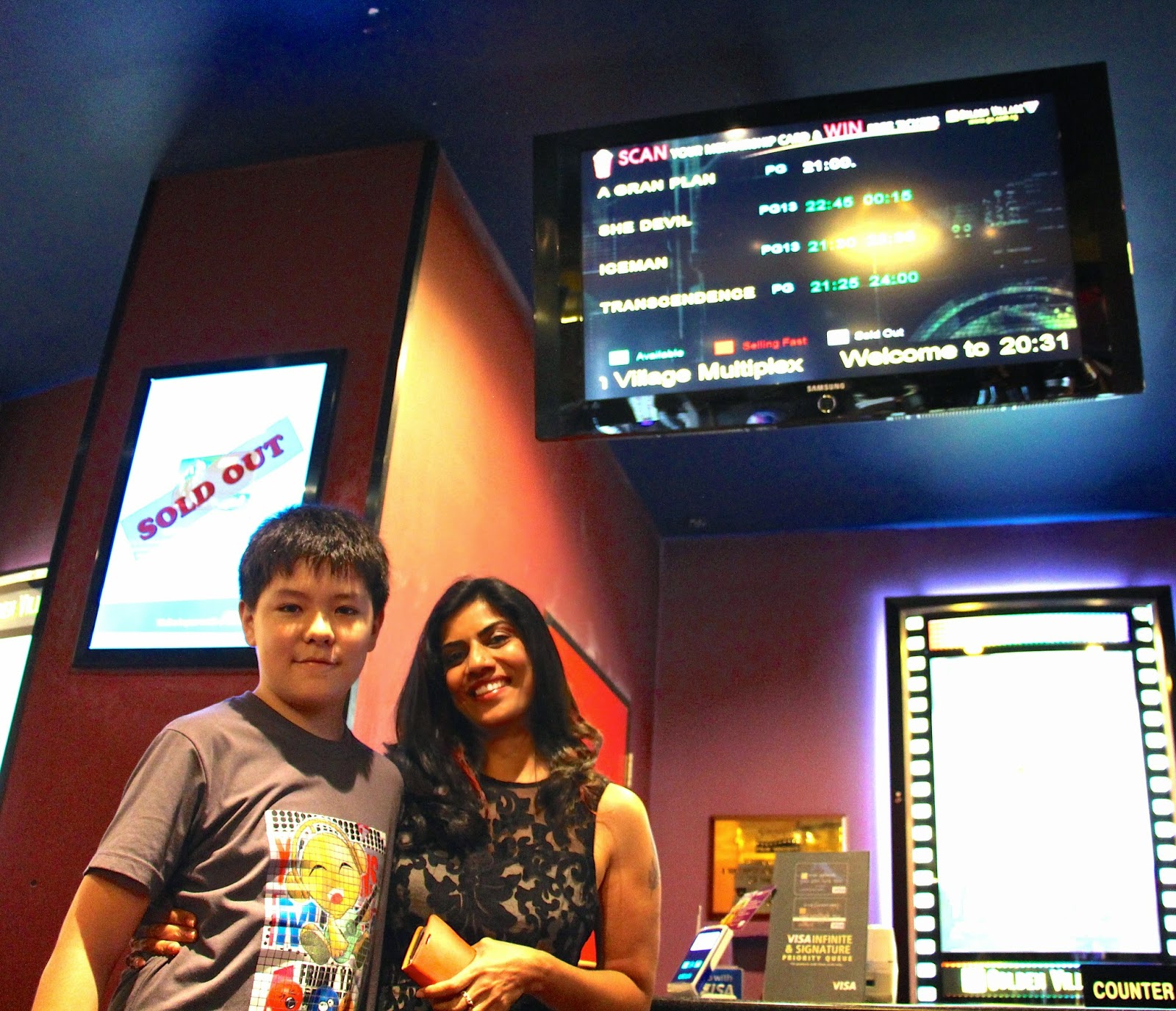 Nice one you two… 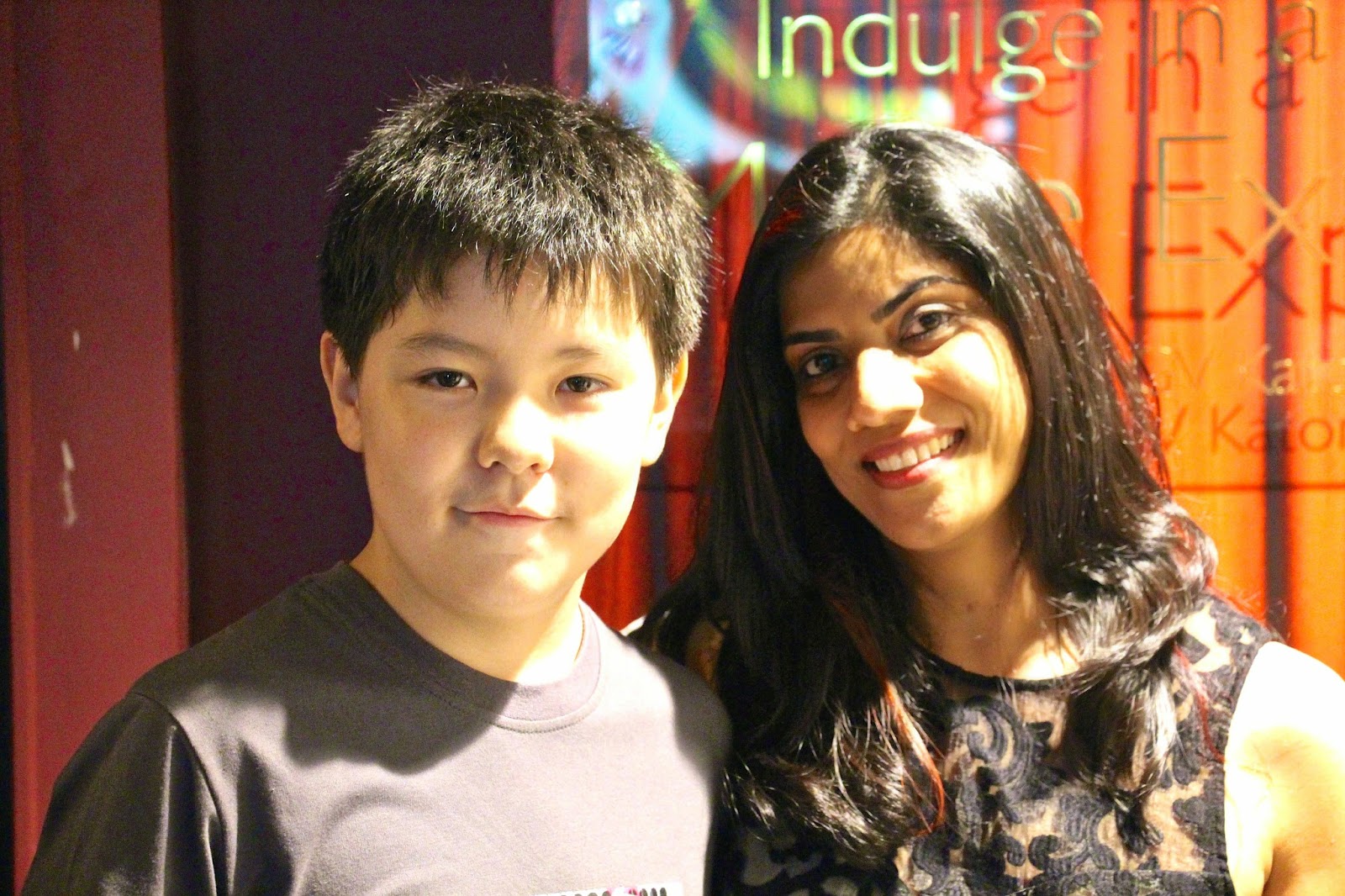 Amazing now the starlets started coming in asking for pictures with the stars.
Here is some small child, Dev I think his name was, and some Filipino called Mary I think.
Purely after a kiss and an autograph.
I think Ollie could get used to this… One of the other actors now stalked by the same Filipino.
Has she no shame.
They are just human beings, that need space sometimes too love.
Nice photo though – he’s gorgeous.
Does he have a ‘big part’? Oooer!!! Again lovely one of the kids. 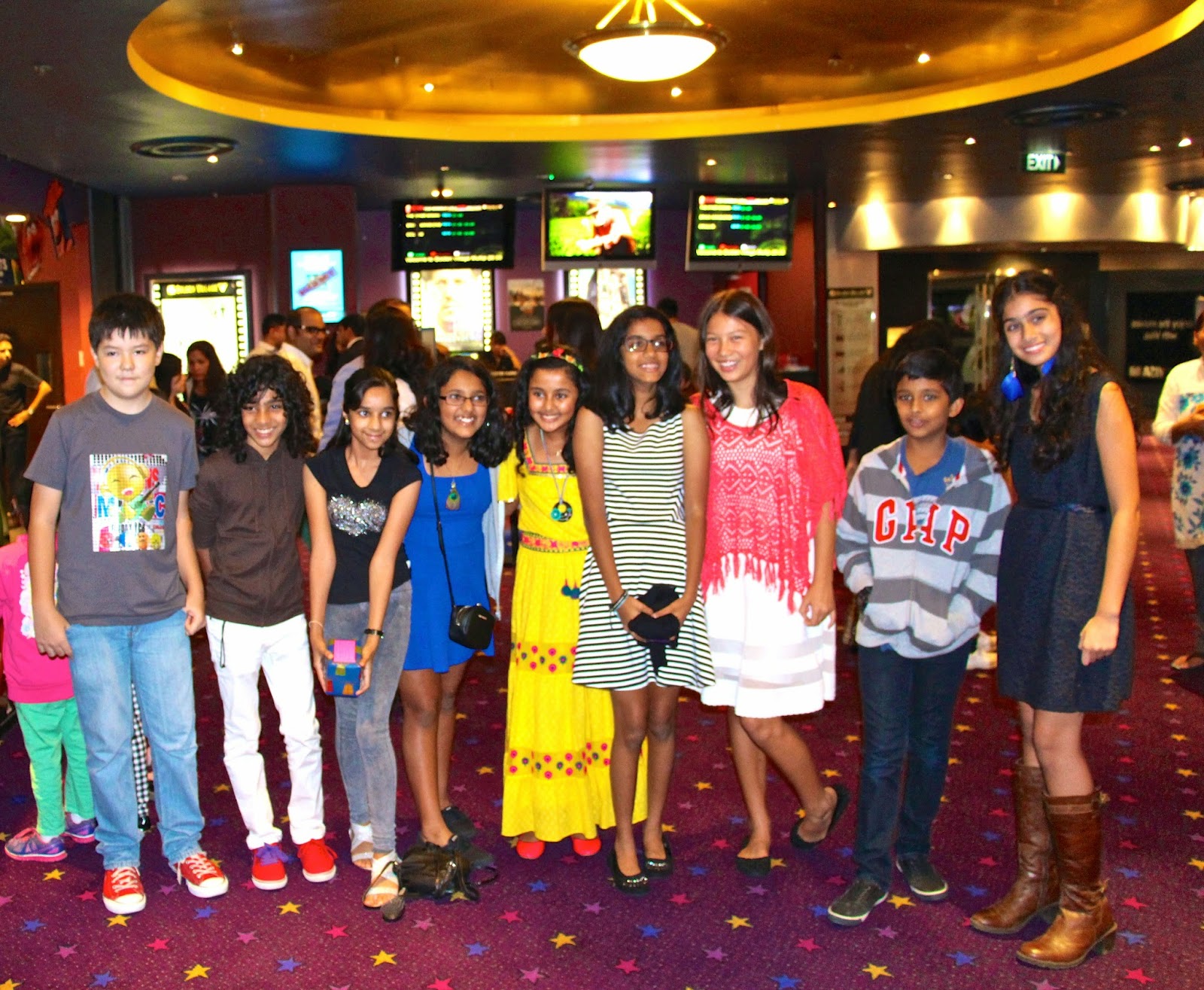 Our other dear dear friend, and Ollie’s ex teacher – Miss Atima comes along for the show too. Nice photo. Ollie how crazily tall have you got since Eton House – WOW! 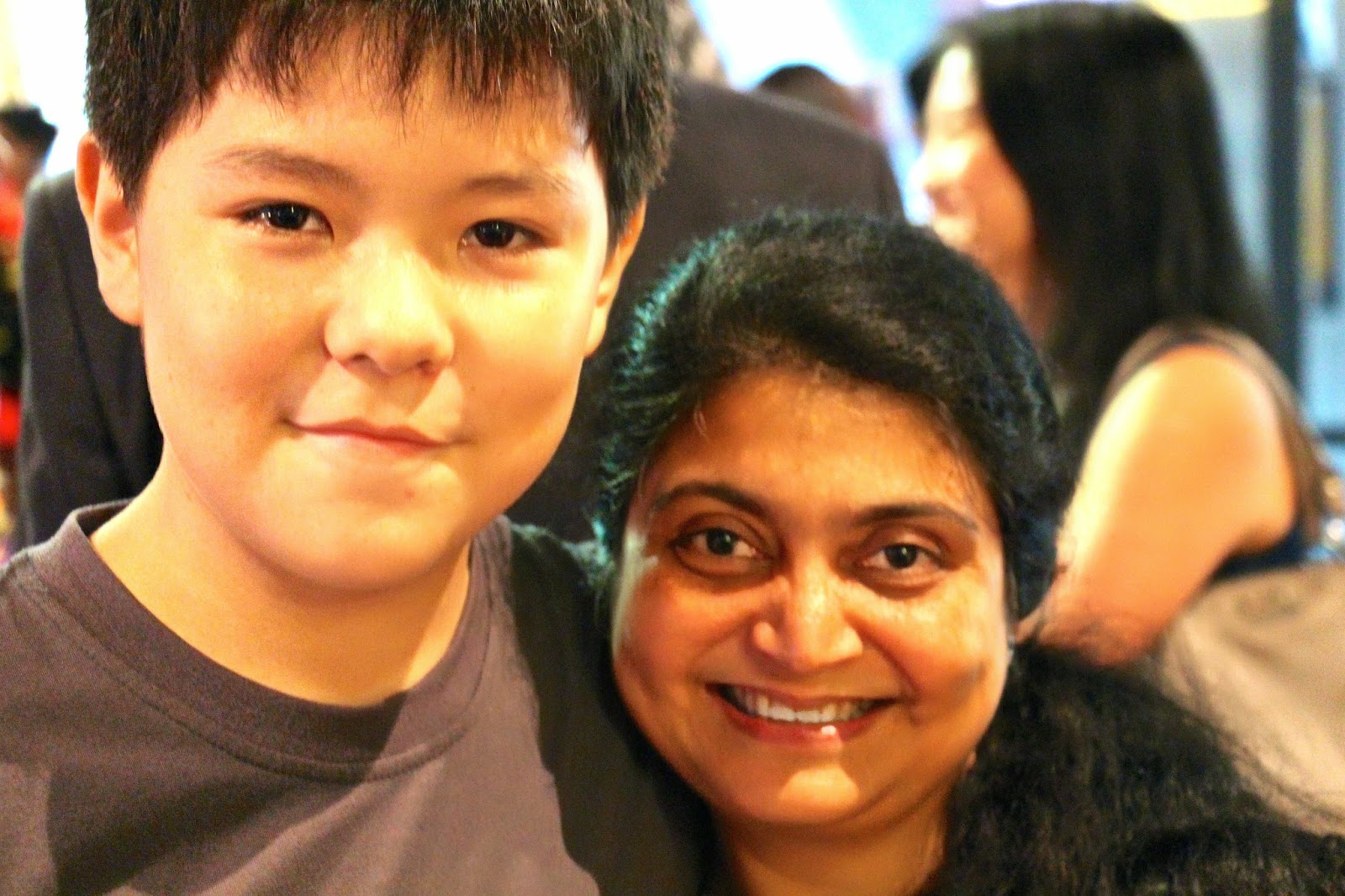 It’s official.
Tickets on sale – with A Gran Plan plastered all over – it really is about to happen.
So excited!!! 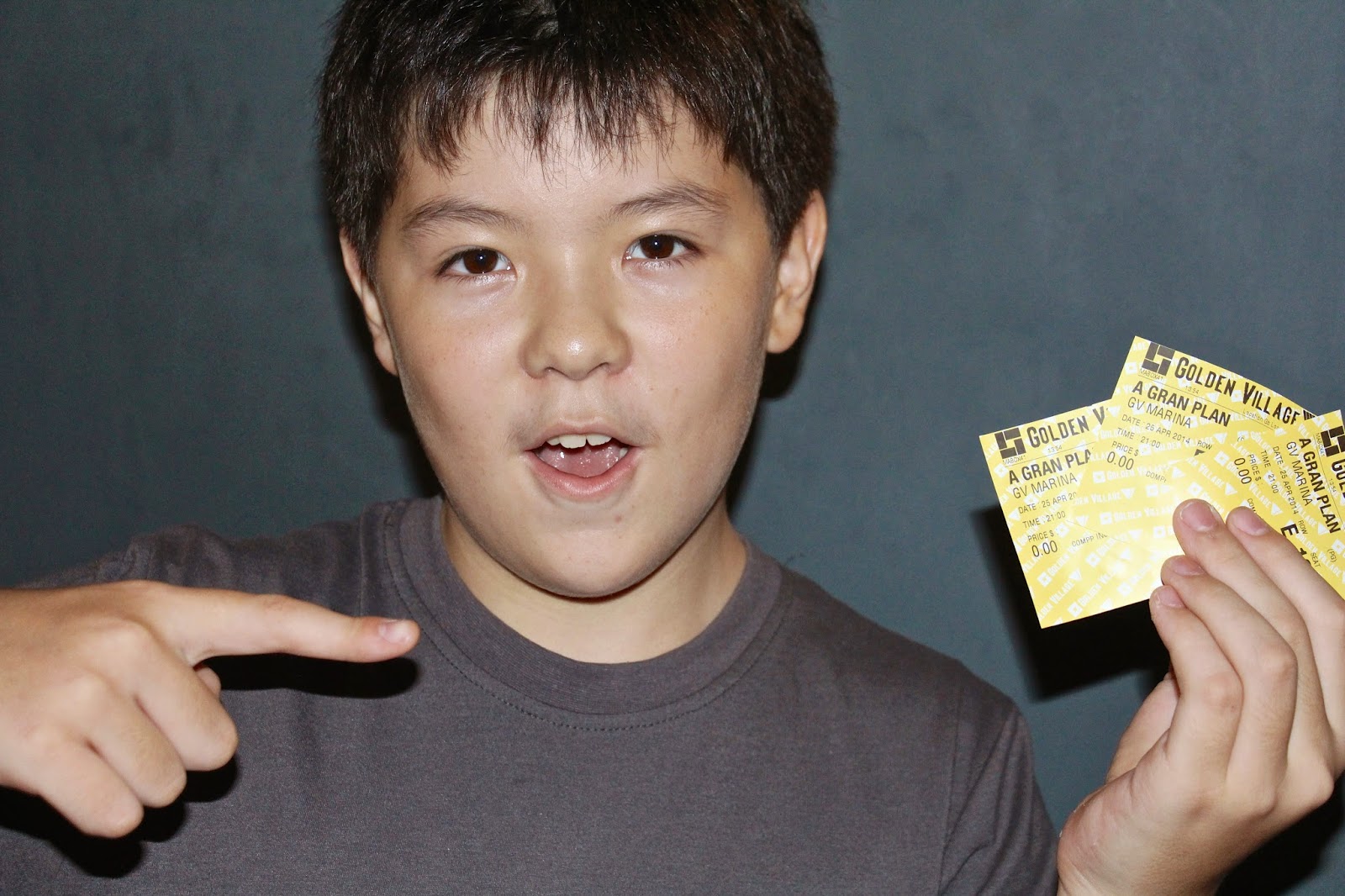 Now to me breaking EVERY copyright law in the world – but hey, it may only happen once in my lifetime – so arrest me!
Here it is – the opening credits and there he is Oliver Kennett just after Farida’s. WOW.
He truly is a star now. 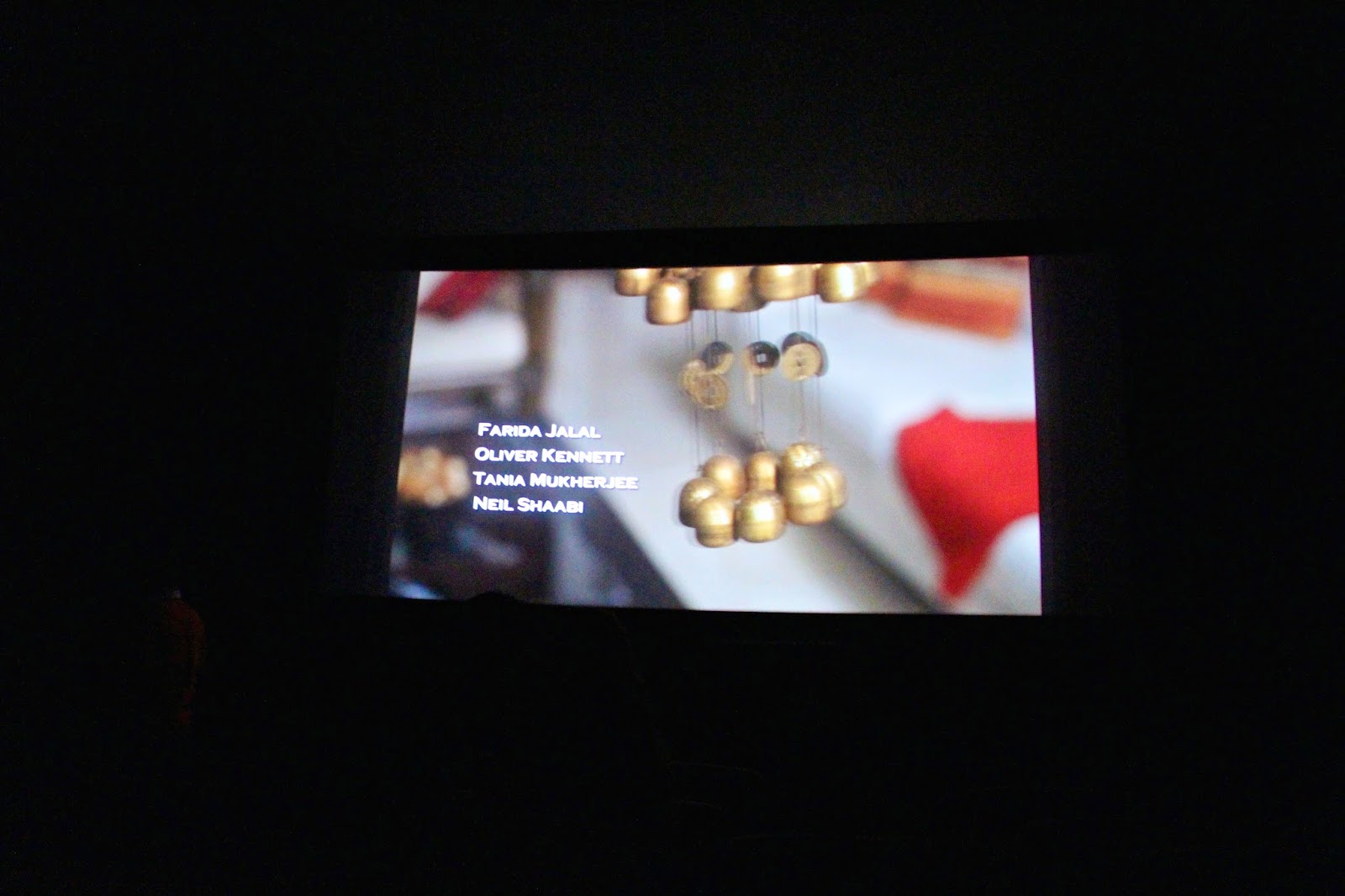 Hold on a minute – who’s that, quite small writing, can’t quite see, seems to be a big star in the film though, need squint, who is it, who is it…
BRIAN KENNETT
That’s who – ha ha!!! One of my all time favourite scenes of the film.
No not telling why or what the scene is about – you’ll just have to book a ticket won’t you.
Suffice to say, get your hankies out, Sangeeta beautiful cinematography – WOW 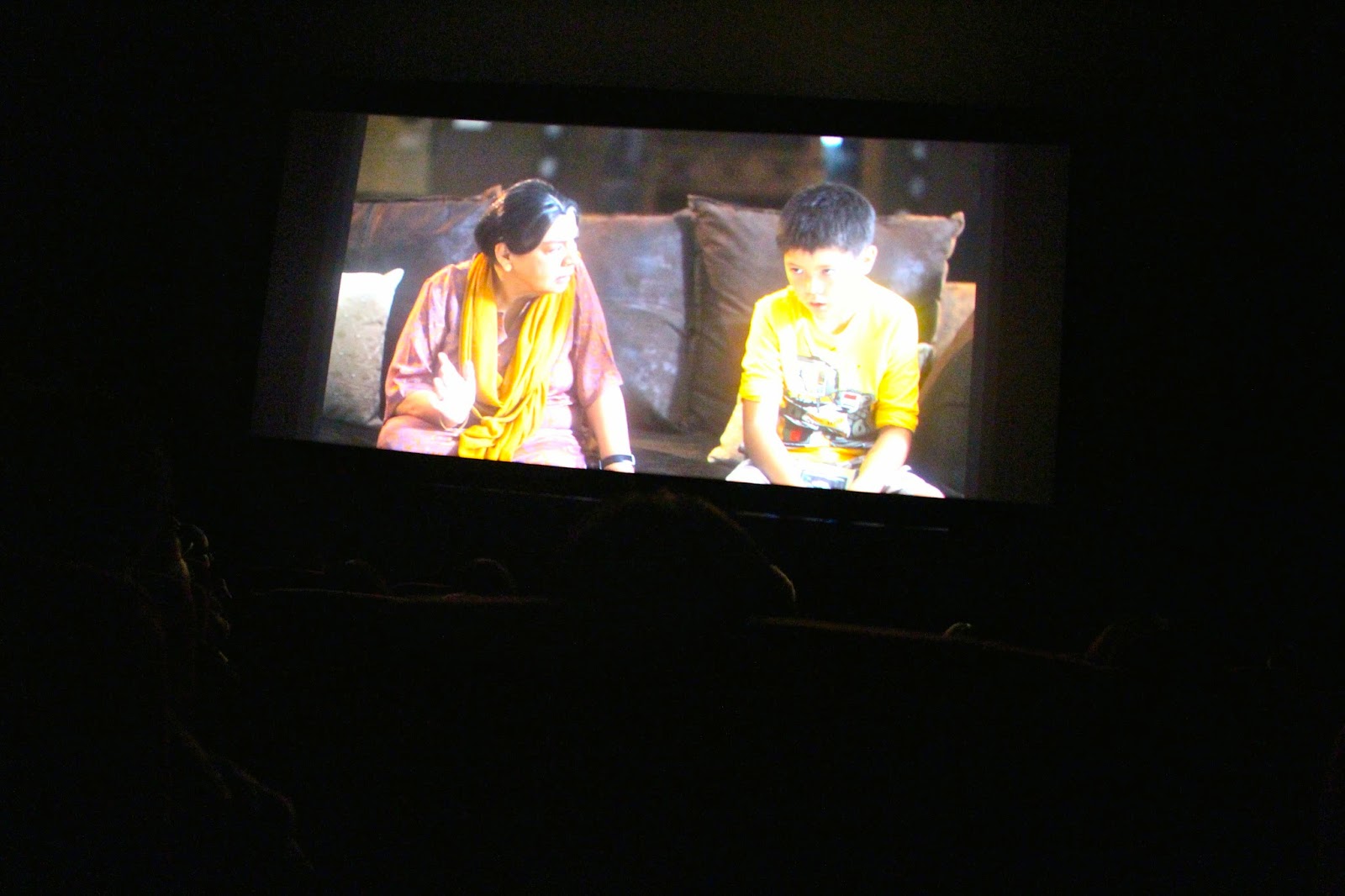 Hold on a minute who’s that – Jude Law???
He looks amazing on big screen who ever he is… Cough Cough!!! 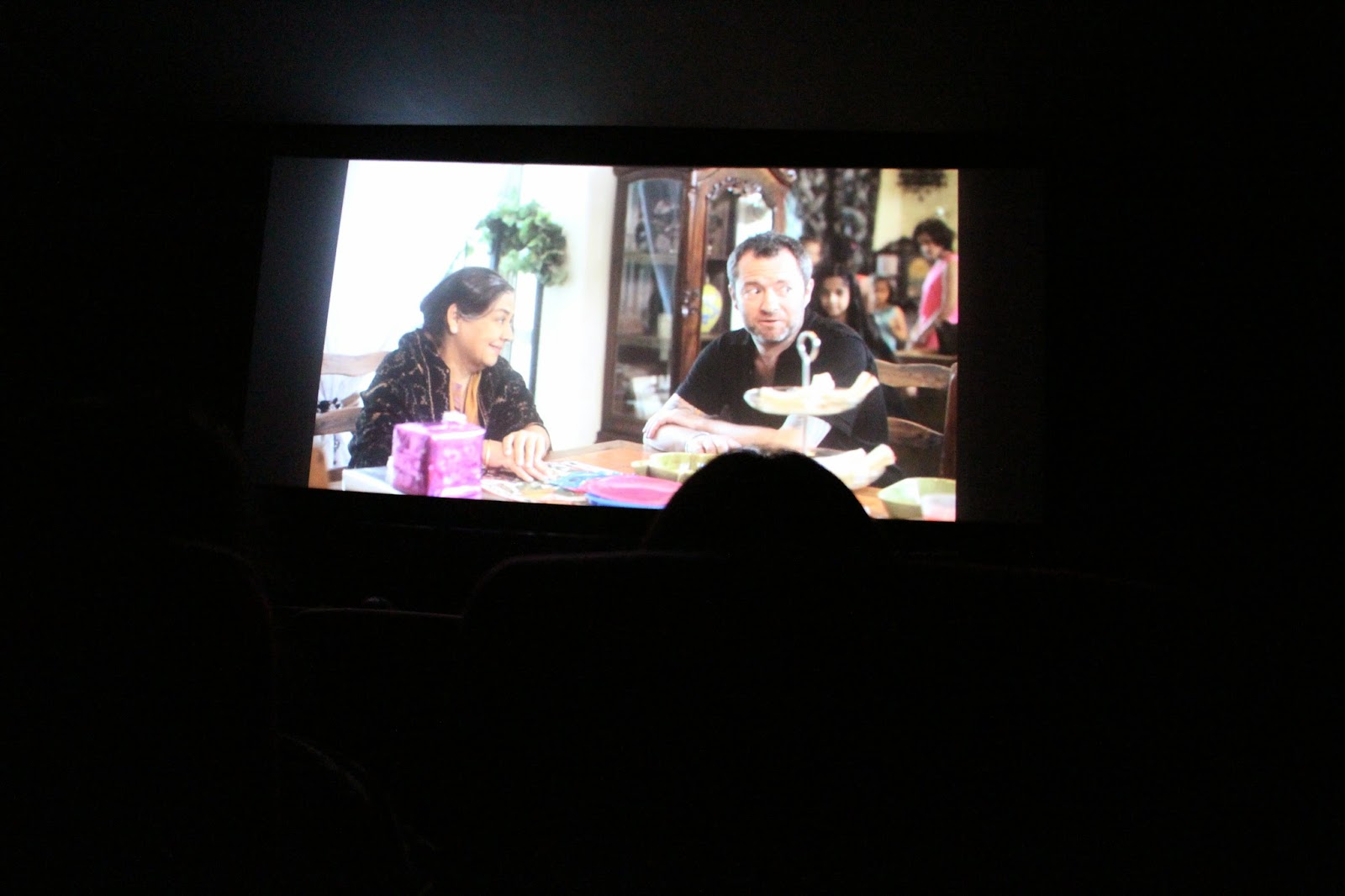 Closing credits – here he is again… 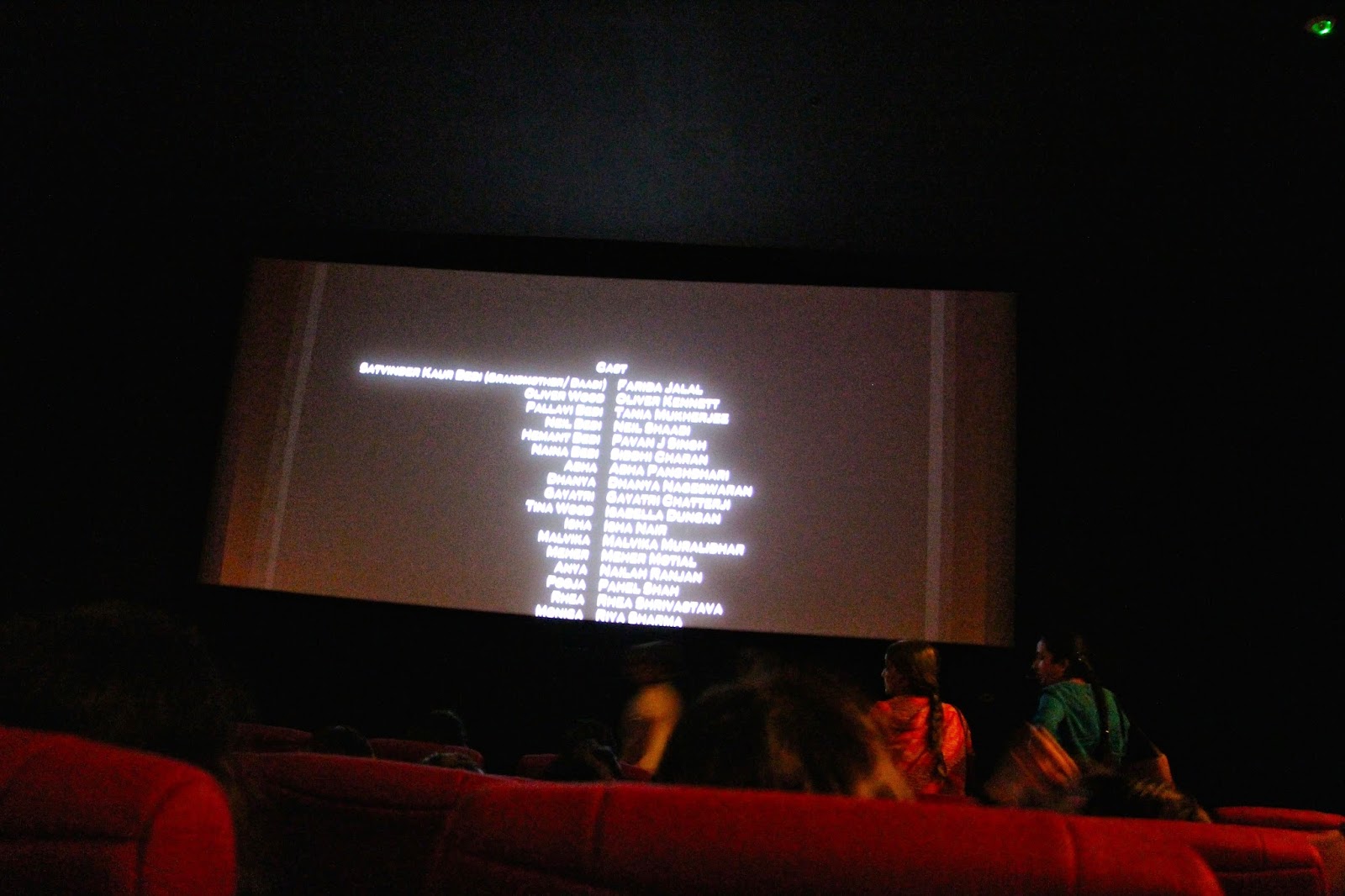 And that other bloke with a small part.
HEY who said that…. Best mates, proud mates, in fact tearful mates when I gave her a kiss 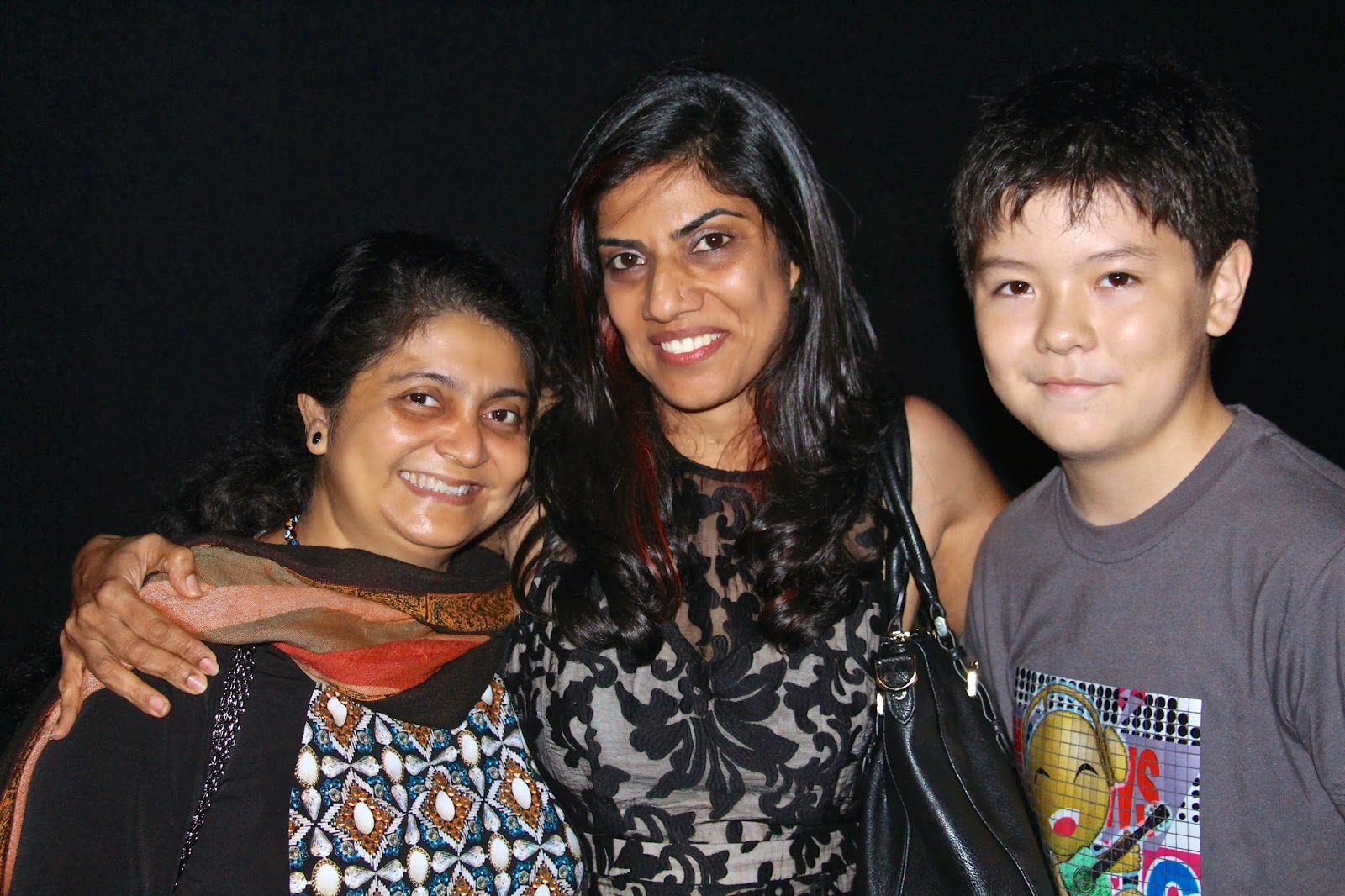 A gift from Sangeeta – never a truer word typed on a t-shirt – well done Ollie, seriously pal that was one of the best films I have ever seen and you were just truly amazing Co-Actors in the green room sharing a beverage to celebrate the Premiere – NICE!!!
Proud Proud Proud Back to top
It’s official we are in!!!

The Oscar’s? Nah better than that it’s the Oliver’s…