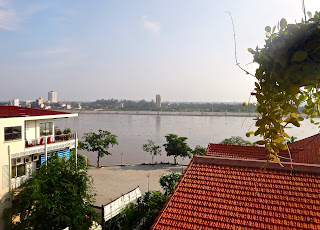 It kind of does not get much better with a breakfast view than this does it?

6 stories up staring at this, the Meekong River, over a boiled egg this morning. What a breakfast.  I could watch this all day long. But coffees/breakfast and kit handouts. Then to the tournament and some questionable birth certificates methinks. Are the lads in blue all 10 or eleven??? Yep and I am 22. Come on look at these guys, ha ha.

But to be honest in the spirit of it, the Eton teams  really shone through. Really the guys did so so well. They played against guys twice thier size but gave it as good as they got. Something to do with missing birth certificates – which when you come here you can completely understand.

So the wee guys had 13++ kids playing against them in the 10 year old league.

The kids played so so so so so so well, and played with a prefesionalism that showed such maturity it was incredible. They played hard and fair against guys more than twice their side. Said nothing. Just played the game. Well done Eton kids. You are a shining light, you really are. A kind of group hug moment.

Let me just share with you, today is 34 degrees heat! A minutes silence for the departed King of Cambodia. Amazing we were here last week, Mary and I, we left Sunday and he passed away Monday. Very very sad, so much mourning whilst here! A King that managed a country through VERY troubling times! Bless you kids you honoured this explicitly. Throughout the guys supported each other.

On the bus rather annoying.

On the pitch so so good. They sat as the red and blue EtonHouse teams cheering each other on continually. Look at the guys here:

Win/Lose/Draw – they really did not care, it was mates from school that needed a jee up – especially when playing against the 6′ ones!!!!!! 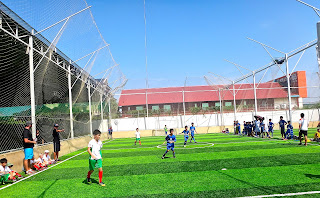 OK some Ollie time now. Not renowned for football prowess, but I think he did good. Ollie you put in some Dad tackles, beauties from the pitch on Sunday. You and the kids undeterred by size or stature, Good effort son. Dad VERY impressed with you and the team around you. What can I say ……??? Not a great really. Just so very proud of the school and the teams representing it. This is almost like sleeping with your sister – sorry!
BUT, this is Ollie actually striking a beauty goal against Eton House (2x teams).
They had to play against each other in the game and he scored two beauties!

I know does not look you scoring but believe me this was a split second after you hit it. OK no goal but action shot to die for, I should be sat behind the goal with one them cameras with a lens the size of Luxembourg. Or maybe not???? 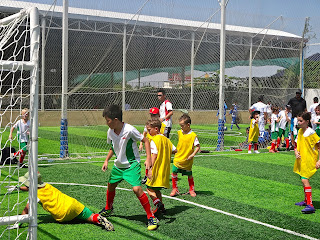 Then it broke down.

Teams melted in to one.

I love this. Eton, became Eton. A huddle, a chat, recognition, and team cheer – what can you say really. 10 year olds in Cambodia, representing as school/country – amazes me. And all these kids did exactly that.

I salute you all. I mean come on look at this. One minute ago they were opposition! 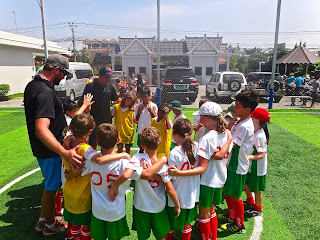 Mr Josh choosing MVP – NOT a job I’d like to be honest as I’d have everyone on the list. BUT also I totally agree with his final choices. Tough choices they were! 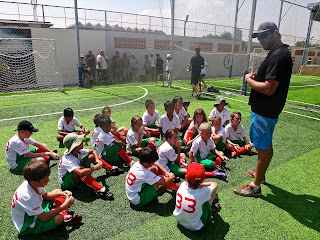 Reaching goodbyes now – let’s get the teams together! 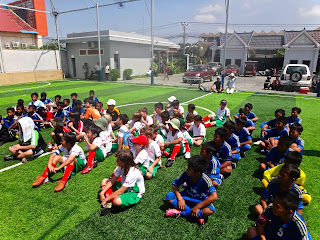 Is this, or is this not, what it is all about.

In fact check the shoes.

Such a mix here of life. BUT all one for this. 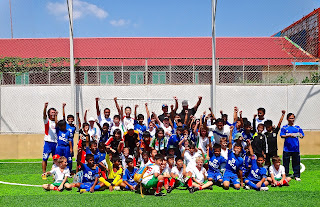 OK this is VERY Japanese.

Me with Ollie, Emi his mate’s Mum (Shogu’s Mum MVP for the tournament for us) plus the guys from the Japan School Aid that fund/sponsor the orphanage we visited.

These guys live and breath what I think we’d like to as they are actually there! 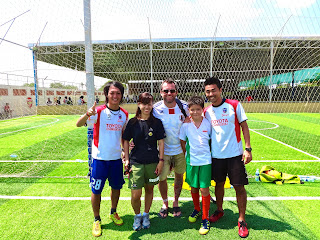 Back to the hotel and we finish with a massive cheer.

Faces say it all.

I think Eton House have done themselves so proud.

Take off the Eton House banner – lets go to individuals.

Kids you have made US all proud this trip. You really have. Parents cam, parents watched and I don’ think parents would have expected so so much from you all! 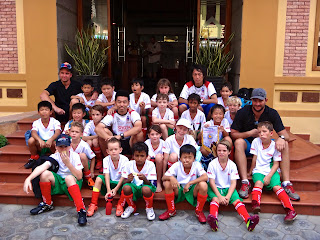 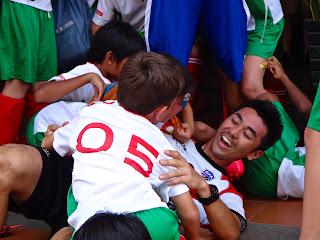 Final words – what can I say!

I have changed some outlooks this weekend. Back to top
Ollie turns 11 in Cambodia

Our last day in Phnom Penh – so truly in reverse order!