Home » Our last day in Phnom Penh – so truly in reverse order!
0
SHARES
ShareTweet
Subscribe
So to the last day. I promise I will go to the first day.
A day that was literally a mixed bag of all-sorts.
We started with a breakfast again overlooking the beautiful Meekong RIver, a lovely light and breezy start to a great great day.
Next as a gang we departed to see the King’s Palace. On arrival though it was found to be closed as the deceased King’s body had come back from China.
So instead we had a little cultural diversion to Dairy Queen for ice cream – ha ha, ok ok ok BUT before that.
I got the kids some ribbons to show respect for the King’s passing. In Cambodia that is black and white ribbons, very similar to envelopes in Japan. We also bought some flowers and some incense sticks for the kids to light and put in the burners as below, again a sign of respect and remembrance. 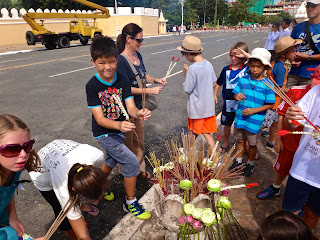 Funny thing was we all got burnt by the hot ends of the other incense sticks – so all the kids became “burn brothers”, and were sat on the bus later showing off their blisters to each other. 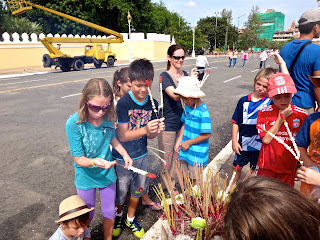 Quite an amazing sight this. So many people from all over Cambodia coming to Phnom Penh to show respects. Even more interesting as this chap was King during all the nastiness but is recognised for all his achievements including gaining independence from France in 1953, and particularly his role in the Paris Peace Agreement in 1991 that marked the end of civil war and brought peace back. Quite an amazing chap, who sadly lost his fight against cancer at the age of 89, whilst living in China.

The locals strap-line for the King is “You are our hero, you will be missed”.

When his body came back from Beijing to Phnom Penh, apparently there were millions of people lined up from the airport to the palace, wanting to pay respects.

Also it is incredible that this happened during the Cambodian long holiday of Pchum Ben, which also happened the day after we returned from Cambodia for Tabitha house building. Quite amazing to be part of this very sad occasion.

Plumes of smoke from the incense sticks wafting over the closed road in front of the palace. 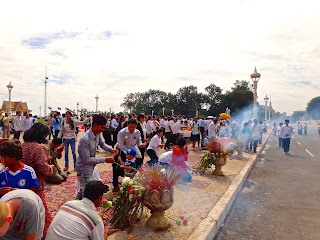 Rows of monks were sat praying for the dead King. Here’s Olive donating some money to one of them. Monks have no income so are 100% reliant on donations of money, food etc. so that they may pray for you and for others. Here again is a long shot of some of the monks.

Notice all the people in black and white again (funerary clothes) donating to the monks. Sometimes food, sometimes money. 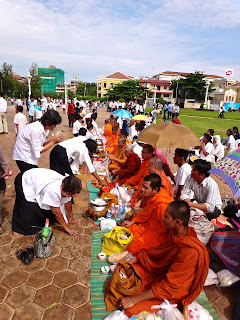 Here is the great man for all to see and pay respects to.

Quite a beautiful sight to be honest. Blue blue skies, very hot, amassed peoples, most people in the black and white outfits, smells of incense and jasmine wafting through the air and chants of the monks, a low repetitive “drone” (not disrespectful here, it’s the only way to describe it). Quite amazing, and quite refreshing to see and be part of it. 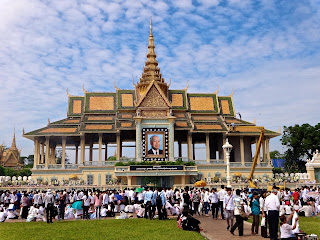 So we’re standing watching and absorbing when a guy walks up to Pete and asks if he’ll do a TV interview. “no problem”, says Pete, “as long as I can mention the school, why we’re here and have a pan round of the kids”. So all agreed with the guy and over comes the camera team.

So the chap interviews Pete, along the lines of;

P – “I am here with Eton House School, visiting some orphanages, and playing football with the kids.”

I – “What do you know of the deceased King?”

P – “The King of Thai….., er cough Cambodia is very well known to us. He was a great man that made a great deal of difference to Cambodia.”

P – “We have had the kids from Eton House doing a lot of research on the King of Thai …….., er whoops, cough cough Cambodia before our trip this weekend.”

And close and thanks!

Thank goodness the reporter did not get one of the kids over to share his/her (non-existent) research on the King. Great job Pete. I think they call it improv theatre mate. So to come to a happy medium Pete and have decided to rename the country to Thaibodia. Has a certain ring to it doesn’t it!?! 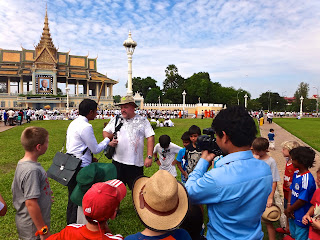 We then pretty much went our separate ways, as we had limited time and didn’t want a repeat of the lunch fiasco at the hotel the day previous. So break the numbers up a bit, have some free time and back to hotel for 1300 check out and depart to our final event.
I tool Ollie, Alecks and Olive to Central Market and we bought some presents, watches for the boys and a bag for Olive. We then went off to the FCC for lunch together and some chats re experiences so far on the trip. Thanks for a lovely lunch kids, really enjoyed that with you – then speeding back to hotel, final chats/drinks with everyone else and let’s check-out and board that bus. Our final event of the Cambodian trip was more football in the city this time.

Here the kids had 11 a-side against the International School of Phnom Penh.

They played so very well against some bigger kids, boiling 35 degree heat, and grass that came up to some of the smaller kids knees. 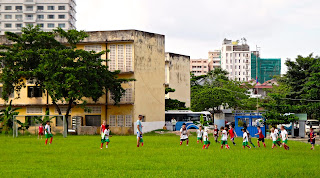 They won and lost, but I personally think were the best team on the day with some amazing skills, open play, goals, tackling and commitment.
Great work kids. You should be VERY proud of yourselves.
0
SHARES
ShareTweet
Subscribe

Back to top
Like the Eurovision contest – in reverse order – here is day 2, Cambodia

Quite a sad on this, but also with some humour